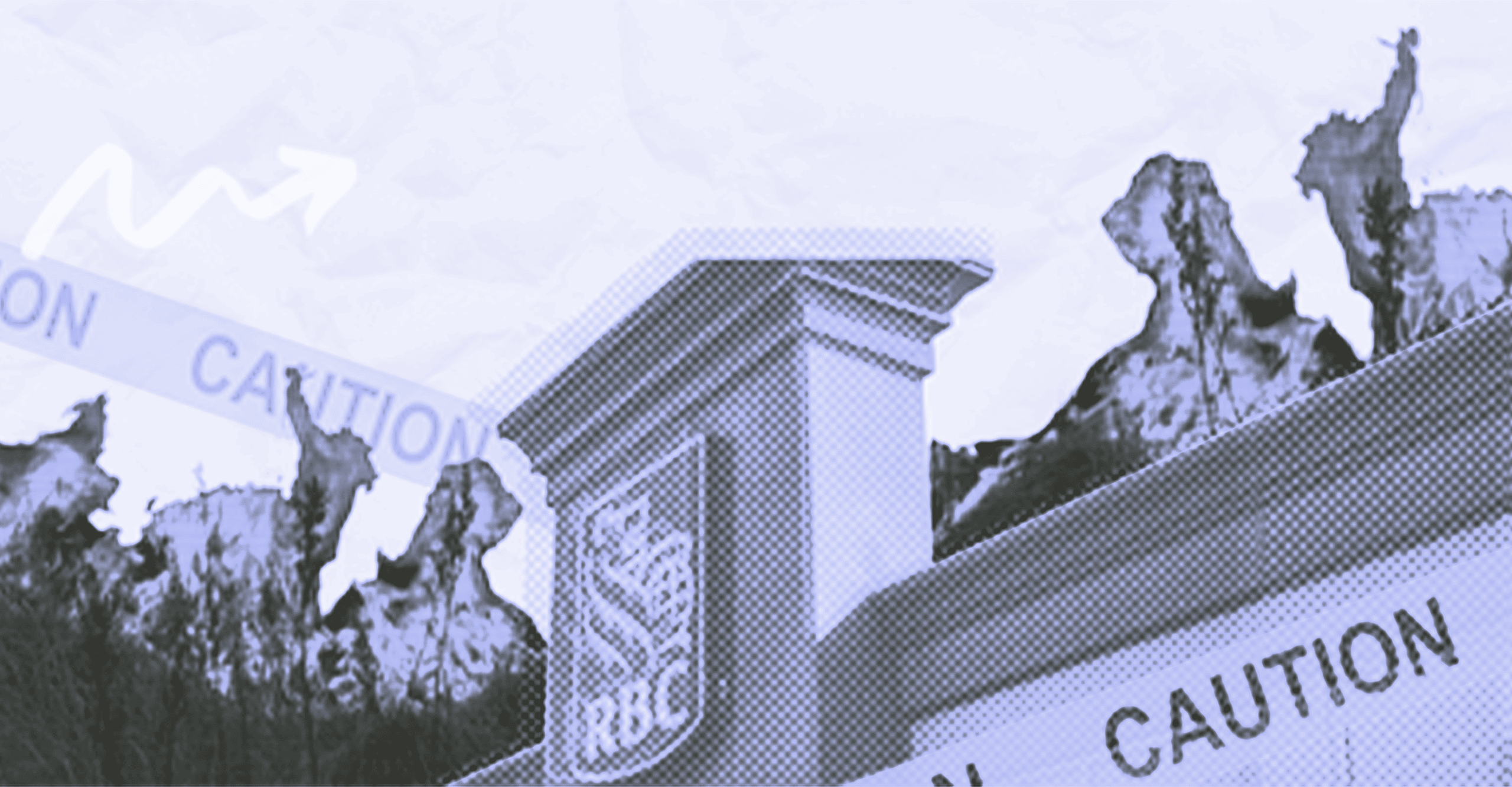 Moving forward on a complaint alleging greenwashing in advertising shows that government agencies are increasingly willing to crack down on companies who misrepresent their environmental credentials to the public. This complaint is part of a wave of legal actions around the world to challenge companies making bold climate claims not backed by credible actions.

Earlier this year, in a complaint brought by Ecojustice and the University of Victoria Environmental Law Clinic, Keurig was fined $3 million for misleading claims its coffee pods were recyclable, proving that the Competition Bureau is willing to act when it comes to allegations of greenwashing.

If the Competition Bureau’s inquiry confirms that RBC’s statements are misleading and false, RBC could be forced to stop advertising itself as supporting the principles of the Paris Agreement and aiming to achieve net-zero emissions targets by 2050. The applicants have also requested that the bank pay a $10 million fine, credited to the Environmental Damages Fund and to be paid to an organization, preferably Indigenous-led, for the purposes of climate mitigation and adaptation in Canada.

RBC has a long track record of continuously greenwashing itself for more than a decade, while in reality it is the fifth largest funder of fossil fuels out of the world’s biggest private banks, and largest amongst banks in Canada.

Canada’s largest bank is set to announce new climate targets any day now, but McKay has already said RBC will not “divest completely from fossil fuels”.

Other media reports suggest RBC is among Canadian banks considering leaving the UN-led international body created to bring the banking sector in line with Paris targets due to a “reluctance to cut carbon emissions”.

Kukpi7 Judy Wilson, Secretary-Treasurer of the Union of BC Indian Chiefs, said:

“RBC is deceiving the public by claiming to be taking climate action while expanding its financing of climate-destroying fossil fuels. Climate change disproportionately impacts Indigenous peoples around the world as well as here in Canada. Until RBC stops financing fossil fuels, advertising itself as Paris Agreement-aligned is greenwashing — and it shouldn’t be tolerated. The UBCIC Chiefs Council has called on RBC to take immediate and substantive action to phase out fossil fuel financing and we will continue to hold RBC to account.”

“RBC has claimed that it will achieve net-zero in its lending and investments by 2050 and will come out with targets and plans over the next two years, but this commitment is undermined by RBC’s continued financing of fossil fuels and its failure to account for the bulk of emissions from the fossil fuel companies that it finances. Without a credible plan, RBC is just making an unverified promise to clients that it will act eventually.

“Any financing of further fossil fuel expansion undermines the principles of the Paris Agreement, particularly the goal of limiting global warming to 1.5 degrees Celsius. By continuing to finance fossil fuel expansion, RBC is misleading its clients by stating that RBC supports the Paris Agreement and is committed to reaching net-zero emissions by 2050.”

“Wet’suwet’en Hereditary Chiefs recently travelled across Canada in a Nation-to-Nation tour to raise awareness about the Coastal Gaslink project and the role RBC plays as financier of the project. It has violated so many of the Wet’suwet’en’s Indigenous rights, including by militarized attacks on the Wet’suwet’en. As drilling begins on our lands, now more than ever, we must stand up and speak out about RBC’s continued funding of fossil fuel infrastructure like Coastal Gaslink and how it contributes directly to climate chaos and undermines reconciliation in Canada.”

“As a mother, I am most fearful for my children’s future if we cannot reach critical climate change goals. Large banks like RBC are contributing  to climate change by continuing to invest in fossil fuels. It’s time RBC and the rest of them are honest about their lack of action and step up to make real change.”

Chloe Tse, Fridays for the Future Toronto/Banking on a Better Future, said:

“With the ongoing climate crisis in mind, I try to be smart about where I put my money.  RBC is my bank and based on all of their messaging, I thought they cared about my future too, and that they were investing in it. After looking at all the data on RBC’s loans, underwritings, and investments in fossil fuel companies, I feel betrayed by their pursuit of short-term profit over being truthful to me and investing in a safe future.”

“On the first anniversary of signing onto the UN’s Global Financial Alliance for Net-Zero, and weeks before COP27, RBC continues to bankroll toxic fossil fuel projects that are violating Indigenous rights, such as Coastal GasLink, while publicly professing to be a climate leader. This is disingenuous greenwashing at best, and unlawful at worst. It’s time for RBC to cut the empty rhetoric, stop working against Canada’s climate goals, and start aligning its financing with science and justice. That means an end to financing fossil fuel companies building new pipelines, drill sites, mines, and gas power plants, and driving climate chaos.“

To view the Competition Bureau Complaint, updated on June 10, 2022, visit this link.

Kukpi7 Judy Wilson is the Chief of the Skat’sin te Secwepemc-Neskonlith Indian Band, a First Nation community located in the south central part of British Columbia.  Kukpi7 Wilson is also the Secretary-Treasurer for the Union of British Columbia Indian Chiefs (UBCIC), which passed a resolution in February 2021 calling on Canadian banks to cease funding the climate crisis and Indigenous rights violations.

Eve Saint is a Wet’suwet’en Land Defender at the Gidimt’en Checkpoint, and is striving to protect Wet’suwet’en territory and the climate from fossil fuel developments such as the Coastal Gaslink Pipeline, a fracked gas pipeline that is funded in part by RBC.  Eve is an RBC client.

Chloe Tse is a Climate Justice Organizer at Fridays for Future Toronto, a local chapter of the youth-led global climate strike movement in Tkaronto (Toronto, Ontario), as well as Banking on a Better Future, a national youth-led organization educating youth on the relationship between finance and climate change.  Chloe is an RBC client.

Jennifer Roberge is a volunteer with For Our Kids Montreal, a group of families working together for climate justice in Tiohtià:ke (Montreal, Quebec).  Jennifer is a small business owner and is an RBC client.

Jennifer Cox is a volunteer with For Our Kids Ottawa, a community of families who have come together to tackle the climate emergency in Ottawa, Ontario (unceded Algonquin Anishinabe territory).  Jennifer is an RBC client.

Richard Brooks is the Climate Finance Director at Stand.earth, an NGO created to challenge corporations and governments to treat people and the environment with respect.  Richard is based in Tkaronto.

Stand.earth (formerly ForestEthics) is an international nonprofit environmental organization with offices in Canada and the United States that is known for its groundbreaking research and successful corporate and citizen engagement campaigns to create new policies and industry standards in protecting forests, advocating the rights of Indigenous peoples, and protecting the climate. Visit us at www.stand.earth and follow us on Twitter @standearth.