Why B.C. can’t wait for stronger water use regulations

In 2015, Vancouver experienced the driest May on record and water storage is plummeting at an alarming rate.

In June, 64 temperature records were broken across the province. Combine that with reduced snowpack run-off after an extremely mild winter, and it’s not hard to see why B.C.’s water resources are under strain.

Two Vancouver Island communities—Parksville and the Regional District of Nanaimo—are facing drought so severe that they are on track to run out of water in the next few months unless consumption patterns change. Across the province, residents are being asked to adhere to a range of restrictions on how, and when they use water. Managing individual water consumption is critical for addressing the drought conditions facing the province. But we’ve got another major issue we need to confront, the B.C. government’s failure to effectively regulate industrial water use.

During times of drought, municipalities can impose an escalating series of water conversation measures for residents. There are however, no provisions in force requiring similar cutbacks by the largest water-users, who use water under licences issued directly from the Province. The agricultural industry, mining companies, oil and gas producers, and even some golf courses, do not face the same cutbacks as B.C.’s urban residents.

Recently, as wildfires rage across B.C., the fact that Nestlé currently pays nothing for access to water has many British Columbians up in arms, and understandably so. B.C. has long charged “water rental fees” for surface water (lakes and rivers) use while maintaining legal ownership of the water, but not for groundwater users. The B.C. legislature passed the new Water Sustainability Act (WSA) in 2014, and when it comes into force, larger groundwater users will also have to pay water rental fees. But that doesn’t fix the underlying problem, water rental fees are simply too low to encourage conservation by industrial and commercial water users.

When the new regulations come into effect, the proposed rate for companies like Nestlé that “rent” groundwater-water is $2.25 per million litres, a figure that has only heightened public outrage. We’re glad the B.C. government is responding to mounting public pressure with a plan to review the new groundwater rate structure set to come into force. It’s an important step in the right direction, but it only addresses part of the problem. Bottled water companies’ draw on local groundwater supplies is a longstanding issue that needs to be addressed as part of an overall effort to sustainably manage our water resources by effectively regulating industrial use of ground and surface water across industries, and across the province.

This year’s drought conditions in B.C. are making it impossible to ignore the pressing need to reform the way the province manages water resources. However, this is an issue the province needs to be thinking about 365 days a year, not just during times of drought. Fortunately, B.C. can draw lessons from other jurisdictions that have been dealing with mounting pressure on fresh water resources for decades.

Last month, the Polis Project on Ecological Governance released a report I co-wrote entitled, California’s Oranges and B.C.’s Apples? Lessons for B.C. from California’s Groundwater Reform. California has been working on the issue of groundwater overuse and drought preparedness since the early 1990s, but didn’t take strong enough steps to be in a position to deal with the current drought crisis facing the state. Meaning, their groundwater—a safety net in dry years—is being depleted at an alarming rate. It was only in 2014 that California created a framework to regulate groundwater extraction. That is also the year B.C. introduced WSA, which expands water licencing to groundwater users in principle, but the regulations and other important details that will lead to concrete changes in practice, are still pending. For the past few decades, California has relied on voluntary and discretionary measures to protect the water supply, measures which weren’t effective. Unfortunately, WSA relies on a similar discretionary approach.

B.C. is in a better position than California in terms of both water availability and population pressures, but as the last year has demonstrated, we cannot take abundant access to fresh water for granted or we risk making many of the same mistakes as California.

We all need to value water, and we all have to play a role in conservation. And we need our governments to intervene to regulate industrial and commercial water use. WSA has the potential to better protect B.C.’s freshwater resources and integrate the management of previously unregulated groundwater into B.C.’s water law system. The water rental rates and administrative charges are an important part of this effort, but a relatively small part of the overall efforts needed. Realizing WSA’s potential will require the development and enactment of a full suite of regulations, and ensuring that “environmental flows” (water needed to support fish and riparian environments) are protected in a strong and binding regulation. 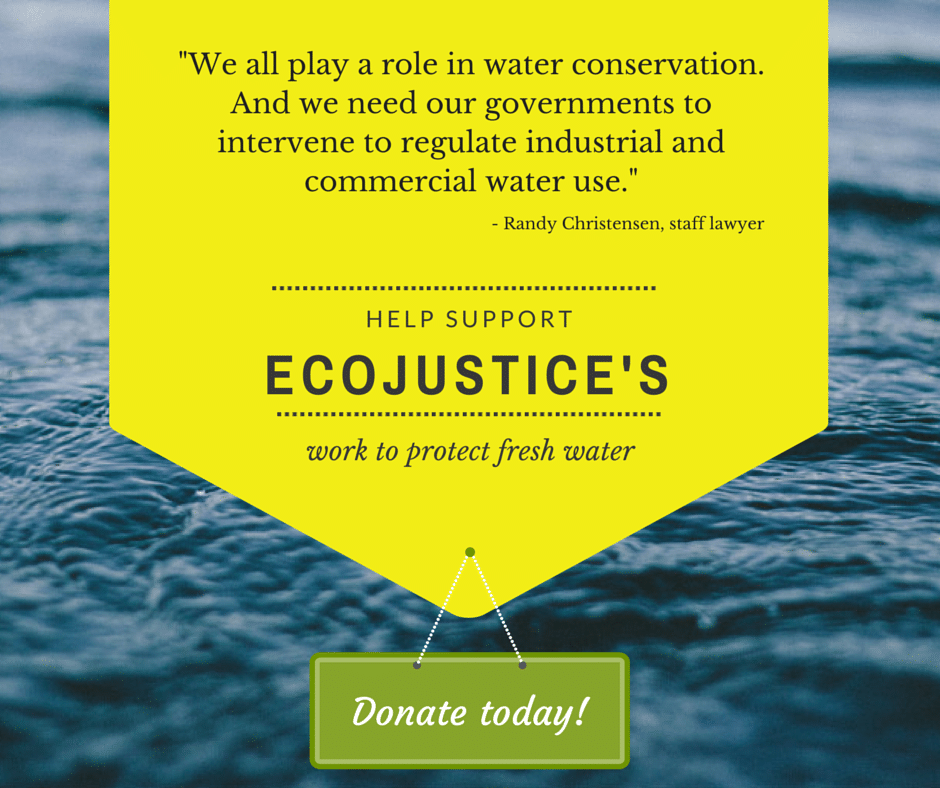 What B.C. can learn from California’s drought and groundwater law reform