Trans Mountain timeline: A look back at Ecojustice’s fight against the pipeline project

When Ecojustice first appeared before the National Energy Board in 2016 to argue that the then-Kinder Morgan pipeline project posed a grave threat to endangered Southern Resident killer whales, we couldn’t have predicted where this fight would go.

We didn’t know the project would prompt such powerful, widespread resistance, helmed by Indigenous leaders such as Tsleil-Waututh Sundance Chief Rueben George. We didn’t know the Canadian government would decide to use billions of taxpayer dollars to purchase the pipeline and planned expansion. And we didn’t know that our own legal case would play a major role in shutting down the initial project approval — only to have the government re-approve the project in June 2019.

We also didn’t know that, within just a few years, concern about climate change would reach a fever pitch and scientists would set a 2030 deadline to drastically cut carbon emissions and avoid climate catastrophe.

What we did know was that, if built, the Trans Mountain pipeline project would push endangered Southern Resident killer whales to the brink of extinction. That remains true today.

There are only 73 remaining Southern Resident killer whales. This fragile population cannot handle existing threats — much less additional threats from Trans Mountain, such as a noisier ocean and heightened risk of a catastrophic oil spill. 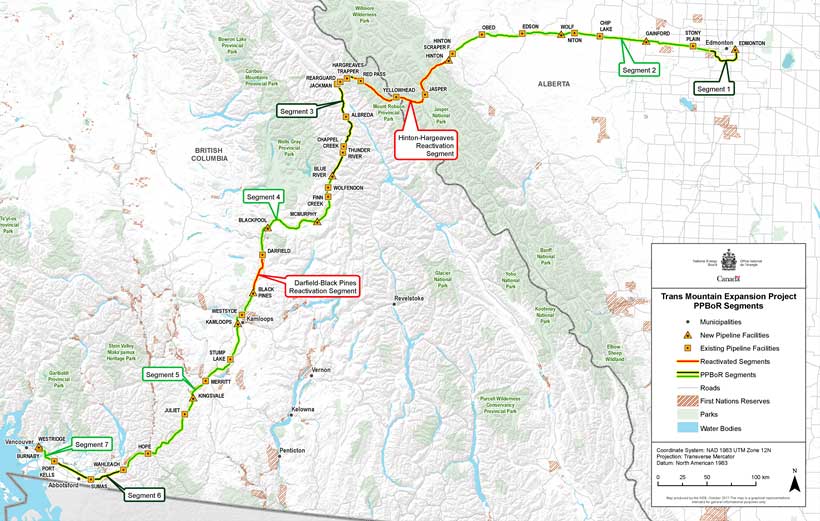 That’s why, together with our clients, Ecojustice remains committed to doing what it takes to protect the critically endangered population of Southern Resident killer whales from Trans Mountain.

The project proposes adding almost 1,000 kilometres to the existing Trans Mountain pipeline and nearly tripling the amount of oil moving along it, from 300,000 to 890,000 barrels per day. Ecojustice argues that the project would pose an unacceptable threat to Southern Resident killer whales.

Kinder Morgan still owns the project at this point in time.

December 2016 – Ecojustice launches a lawsuit in the Federal Court of Appeal, challenging the federal government’s decision to approve the Trans Mountain project.

October 2017 – On behalf of our clients, Ecojustice appears in court as part of a landmark hearing in which environmental groups, First Nations, communities and local governments make the case for why Trans Mountain cannot proceed. Ecojustice lawyers argue the government’s approval of the project violated its responsibility under the Species at Risk Act to protect endangered Southern Resident killer whales. 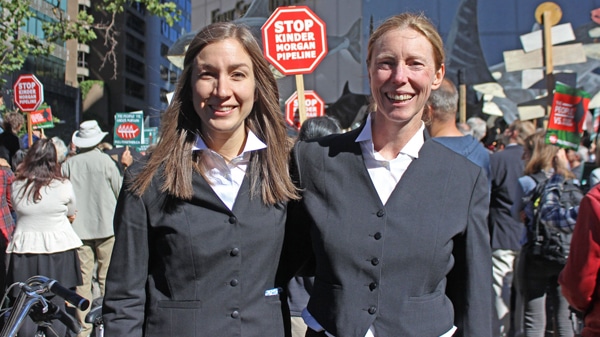 May 2018 – Amidst uncertainty about the project’s future, the Federal government announces it will buy the Trans Mountain pipeline for $4.5 billion. Ecojustice issues a statement calling the move “deeply disappointing and shockingly irresponsible.”

August 2018 – Ecojustice wins a major victory when the Federal Court of Appeal strikes down Cabinet’s approval of the Trans Mountain project. The court rules that the approval failed to comply with the Species at Risk Act and that the government failed to properly consult with First Nations. In response, the government sends the NEB back to reconsider the project’s marine shipping impacts.

WATCH: A win for endangered orcas! We and our clients, @Raincoast and @LivingOceans, are pleased with the Federal Court of Appeal’s decision to overturn the #TMX approval. via @GlobalTV @laylesworthtv. https://t.co/42vjxbp0hb

January 2019 –Ecojustice, Raincoast Conservation Foundation, and Living Oceans Society make another round of submissions to the NEB for its reconsideration of the Trans Mountain project. Ecojustice lawyers present evidence on how project-related marine shipping would impact endangered Southern Resident killer whales.

February 2019 — Despite finding that the Trans Mountain project would have “significant adverse environmental effects” on Southern Resident killer whales and on “Indigenous cultural use” associated with the endangered orcas, the NEB recommends Cabinet approve the project for a second time.

The #NEB has concluded that the #TransMountain Expansion Project is in the Canadian public interest & has recommended that the project be approved, subject to 156 conditions. The NEB has also made 16 new recommendations to GIC. https://t.co/5Miek9KVVw https://t.co/tWzA3BHGNK

June 2019 — The federal government re-approves the Trans Mountain pipeline project less than 24 hours after hollowly declaring Canada is in a climate emergency.

August 2019 – Three Southern Resident killer whales — J17, a 42-year-old female, K25, a 28-year-old male, and L84, a 29-year-old male — die over the summer, bringing the population down to just 73 orcas. The triple loss is another sign that members of this endangered population cannot handle existing threats to their survival.

September 2019 – The Federal Court of Appeal decides not to grant leave for the conservation groups’ challenge of the Trans Mountain approval. In the same decision, the court announces it will not hear any arguments based in environmental law on the project.

Since the Federal Court of Appeal decided not to hear our case in September, Ecojustice lawyers have been working closely with our clients to carefully consider our options — including deciding whether to take our challenge to the Supreme Court of Canada.

In the meantime, we continue to use the power of the law to defend nature and combat climate change.

Now that Canadians have given the Trudeau government a new, minority mandate, Ecojustice is focusing in on three key priorities: A new national climate law, modernizing the Canadian Environmental Protection Act, and a new Aquaculture Act. For more, check out this blog.

Looking ahead, one thing is clear: We face an unprecedented biodiversity crisis and a climate emergency, and we cannot afford to shortsightedly stick to “business as usual.”

Back in 2016, we couldn’t have predicted how the Trans Mountain saga would play out. But, knowing what we do now, we must have the courage to say no to projects that threaten endangered species and lock us into fossil fuels for decades to come. And we must have the have the integrity to pass better, stronger laws to protect Southern Residents, the climate, and future generations.

This Trans Mountain timeline offers a closer look at Ecojustice’s fight to protect endangered killer whales from the project. For a more general history of the project, you may be interested in this roundup from CTV.

What’s next in the Trans Mountain fight