Three ways you can #HelpHarrietsfield today

Speak out and #HelpHarrietsfield residents gain access to drinking water that is clean, safe and of an acceptable quality.

Water is a vital part of everyday life. We use it regularly for everything from washing dishes and cooking to drinking and brushing our teeth. To complete these tasks, many of us simply need to turn on a faucet and there it is: Water that is clean, safe, and of an acceptable quality —free from bad taste and smell.

Marlene Brown fills a water jug at her local church.

Unfortunately, this is not the case for all Canadians.

Marlene Brown and others in Harrietsfield, N. S., encounter daily challenges trying to complete these basic tasks. For more than a decade, some residents’ well water has been impacted by toxic chemicals from a now-defunct recycling facility. Some community members are so worried about the water quality in their homes that they drive to a church several kilometres away to fill up water jugs with what they need to meet their basic needs.

That’s why this World Water Day, we’re calling on the municipal, provincial and federal governments to work together with impacted residents to ensure that Marlene and her neighbours in Harrietsfield have access to drinking water that is clean, safe, and of an acceptable quality.

No one should be forced to drink water that could pose serious health risks or that has a foul odour, colour, or taste caused by activities beyond their control.

It’s time for government officials to take action and help Harrietsfield residents. Currently, Halifax’s municipal water supply ends just before Harrietsfield. Although City staff have noted that extending water services can be too expensive, Halifax MP Andy Fillmore has suggested that federal funding may be available for the province and/or municipality to address the problem. We are encouraged by Andy Fillmore’s commitment to working with residents to find a solution to this problem, and hope that he will continue to fight on behalf of Harrietsfield residents.

Clearly, there is more that needs to be done. It’s time for government officials to work together with impacted residents to help Harrietsfield.

Three ways you can #HelpHarrietsfield today:

Join us and voice your concerns about the situation in Harrietsfield to Halifax’s mayor Mike Savage, Halifax MP Andy Fillmore, Halifax Atlantic MLA Brendan Maguire, and Nova Scotia’s Minister of the Environment, Margaret Miller. It’s time for them to come together to ensure Marlene and the people of Harrietsfield have drinking water that is safe, clean, and of an acceptable quality.

Here are a few sample tweets you can use, or pen your own! Include the hashtag #HelpHarrietsfield to join the conversation with other Harrietsfield supporters: 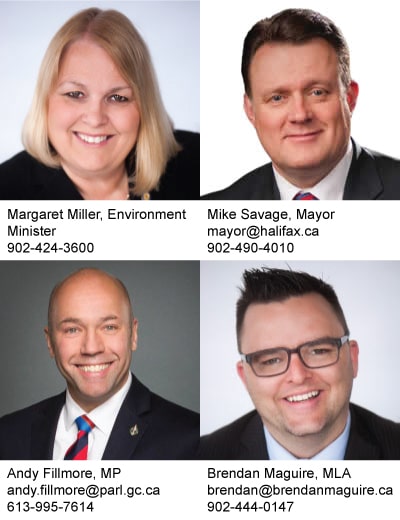 Tweeting isn’t the only way you can voice your concerns. You can also help Marlene and her neighbours by emailing or phoning government representatives. Remind them that Marlene and the people of Harrietsfield need their help for change to happen. You can reach them at minister.environment@novascotia.ca; mayor@halifax.ca; brendan@brendanmaguire.ca; and andy.fillmore@parl.gc.ca.

Write a letter to the editor of your local paper or The Chronicle Herald in support of the basic human right to water and urge all three levels of government to work together to ensure Harrietsfield residents have access clean, safe drinking water of acceptable quality. Every person in Canada should be able to drink the water that comes out of the taps in their home without fear.

Your support makes a difference

What’s happening to Marlene and her neighbours is not right. No one should have to trek far from home to access drinkable water. Every person in Canada should have access to sufficient, safe, acceptable, physically accessible, and affordable water for personal and domestic uses.

Let’s urge government officials to take action now. Take a stand with us, and make your voice heard.