The man who beat Monsanto inspires my wish for the environment

I’m Elaine, an environmental engineer and Ecojustice’s healthy communities program director. And I care deeply about protecting people and the environment from harmful pesticides.

That often means going up against the federal government and multinational chemical companies — forces akin to Goliath looming over the Ecojustice team, a small but mighty David — to ensure that the people and places we love are protected.

Like many Ecojustice supporters, I was deeply moved by Dewayne Johnson’s story. Dewayne is the former school groundskeeper who developed non-Hodgkin’s lymphoma after repeated exposure to glyphosate, the active ingredient in Monsanto’s Roundup. He subsequently took the chemical giant to court in California — and won.

Dewayne’s courageous fight inspires my holiday wish for the environment – that Health Canada acts in the public interest when it comes to regulating harmful pesticides like glyphosate.

A common issue surrounding the registration of pesticides in Canada is whether the federal regulator has considered the proper science in its assessment process. Often, it has not. That’s why, thanks to supporters like you, we were in court last month, suing the regulator for unlawfully and repeatedly registering bee-killing Thiamethoxam for use in Canada.

As we await the court’s decision, we are also petitioning Health Canada to re-consider its approval of glyphosate, a probable human carcinogen. At issue is the integrity of the science that Health Canada considered: Its decision was informed by scientific research that Monsanto had a secret hand in producing. 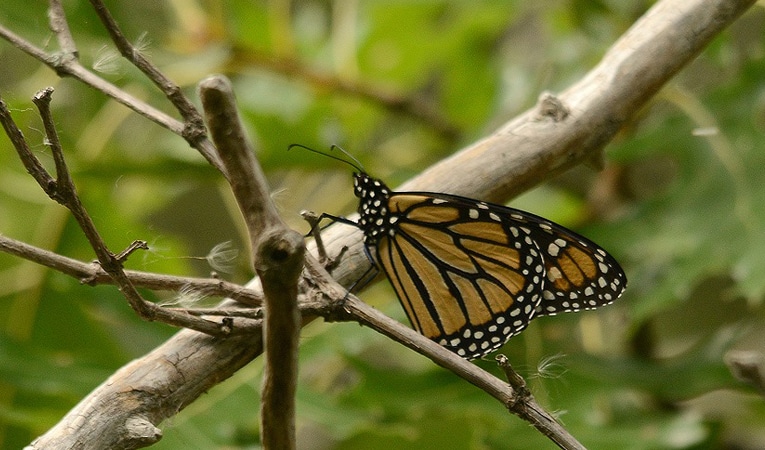 A monarch butterfly in Rondeau Provincial Park, Ontario. Glyphosate is known to kill milkweed, a host plant that this iconic pollinator species depends on. (Green Raven Photography via Flickr | CC BY SA 2.0)

The impact pesticides have on the environment is far-reaching. They make it into the air, water, and land that we all depend on. Sometimes they are so persistent they permeate the arctic poles — Antarctic penguins still show signs of the pesticide DDT, even though the substance was banned in the 1970s.

Please, help Ecojustice continue to fight for the proper assessment and improved oversight of pesticides to ensure the environment and your health are protected.

P.S. Protecting the environment is the most meaningful gift we can offer our loved ones. Please make a gift today and give voice to nature in courtrooms and legislatures across Canada.