The Right to a Healthy Environment: Canada’s Time to Act 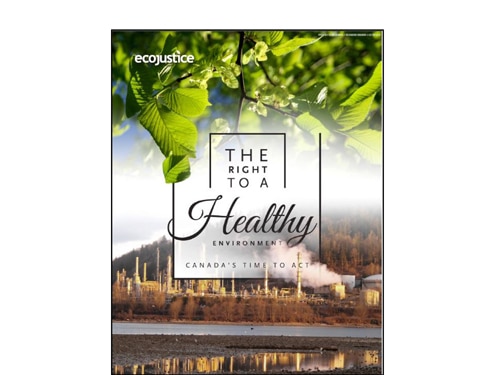 Most Canadians agree that strong environmental laws are important because they protect the quality of the air, water and land that our health depends on.

Despite being home to 20 per cent of the world’s freshwater resources, Canada has no national law that regulates drinking water quality. Alberta’s oil patch represents one of the biggest industrial projects on the planet, but federal laws fail to adequately regulate air, water or land pollution from oilsands extraction. Weak oversight by regulators also plagues the mining industry.

Countries around the world have begun to introduce laws to address or mitigate the effects of climate change, but Canada’s laws have been slow to adapt. In fact, regulatory reviews of major energy projects in Canada consistently omit meaningful
consideration of greenhouse gas emissions.

In almost every respect, Canada’s environmental framework falls short. And we pay the price.

Weak environmental laws that fail to adequately protect against threats to the air, water and land that we all depend on put the health and wellbeing of Canadians at unnecessary risk.

But together, we can get Canada back on track. More than 110 countries have already recognized their citizens’ right to a healthy environment by enshrining it in their national constitution. Now it’s time that we demand Canada do the same.

Together, we can make it happen.