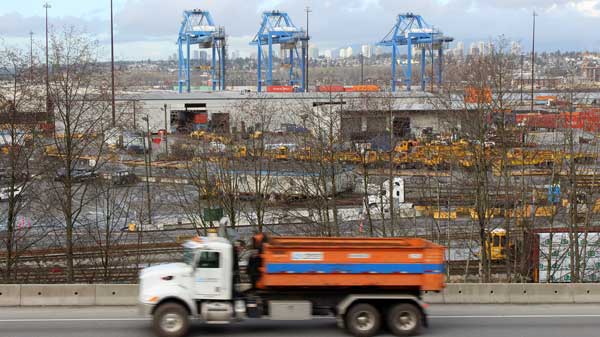 Ecojustice lawyers were in court on Nov. 8 on behalf of Communities and Coal and two local residents who oppose the Fraser Surrey Docks coal facility.

The debate over dirty U.S. coal has a Canadian connection.

Coal is one of the dirtiest fossil fuels on the planet. In fact, according to our friends at the Natural Resources Defense Council, coal is the most carbon-intensive fossil fuel we can burn.

It’s also bad for human health, and has been linked to asthma and cancer.

That’s why 14 coastal states, including New York and California, spoke out last month against a Trump administration plan the Clean Air Task Force described as a “transparent attempt to illegally extend the lives of old, highly polluting, coal-fired power plants.”

Meanwhile in Canada, Ecojustice lawyers were in court this month to fight plans to ship even more U.S. coal though British Columbia’s Lower Mainland.

If built, the Fraser Surrey Docks coal project would see up to four million tonnes of thermal coal carried by open-car rail from Wyoming’s Powder River Basin through Vancouver’s Lower Mainland each year, ultimately bound for export to foreign markets.

Together with the organization Communities and Coal and two local residents, Paula Williams and Christine Dujmovich, Ecojustice has been engaged in a years-long fight to stop the facility and keep bias out of project approvals.

In early November, we appeared before the Federal Court of Appeal to appeal an Federal Court decision that would allow the project to go forward.

On behalf of Ecojustice’s clients, my colleague Harry Wruck and I argued that the conduct of the Port and its officers gave rise to a reasonable apprehension of bias when it greenlighted the coal project — in part because the Port’s employee bonus scheme offered significant financial incentives for executives to move the project forward despite concerns from local residents.

When burned in overseas facilities, the coal shipped through the Surrey Fraser Docks coal project would contribute nearly seven million tonnes of CO2 emissions at a time when experts say we have only 12 years to cut emissions and stave off climate catastrophe.

In addition to the climate impacts, Ecojustice’s clients are also deeply concerned about the potential health risks associated with transporting huge quantities of U.S. coal through their communities.

In the U.S., it is estimated that the Trump administration’s emissions plan could lead to the premature deaths of as many as 1,400 people every year by 2030, and cause tens of thousands of additional cases of asthma.

If successful, Ecojustice’s appeal will put the brakes on the expansion of U.S. coal exports through Canadian ports by quashing the permit to construct the Surrey Fraser Docks project and forcing the Port to review the project again.

While we are unlikely to see a decision from the court before the New Year, Ecojustice’s efforts to combat climate change and fight for a healthy environment for all aren’t slowing down.

In B.C., we’re preparing to respond to the government’s climate change strategy, which is expected in the coming weeks. We also recently launched a lawsuit on behalf of Sierra Club BC, taking the province to court over its decision to grant environmental assessment exemptions to two dams used to store freshwater for fracking in northeastern B.C.

In Alberta, we are involved in a Joint Review Panel Hearing on Teck Resources Ltd.’s Frontier Oil Sands Mine, a project that, according to the developer, could lead to production of up to 260,000 barrels of bitumen per day, beginning as early as 2026. And in Ontario, Ecojustice is forging ahead with a lawsuit against the Ford government for breaking the law when it cancelled the province’s cap and trade program.

Meanwhile, across Ecojustice’s offices, from Vancouver to Calgary, Ottawa and Toronto to Halifax, we are continuing to develop ground-breaking litigation to address the planet’s urgent climate needs — work that is only possible because of Ecojustice’s phenomenal community of supporters.

From all of us at Ecojustice, thank you for helping us build the case for a better earth.