VANCOUVER / UNCEDED xʷməθkʷəy̓əm, Sḵwx̱wú7mesh AND səlilwətaɬ TERRITORIES — Ecojustice, on behalf of the Wilderness Committee, is demanding the federal government live up to their legal responsibility to protect endangered spotted owls and their habitat in British Columbia. The owls are in critical danger of becoming extinct in Canada.

In a petition to Minister of Environment and Climate Change Steven Guilbeault, the groups demand the minister recommend an emergency order that would protect endangered spotted owls and their habitat.

“Spotted owls are in critical danger of becoming extinct in Canada, in large part, because the B.C. government has continued to approve commercial logging in areas that should have been set aside for the species’ recovery,” said Ecojustice lawyer Rachel Gutman. “Minister Guilbeault must take immediate action to protect spotted owl habitat and give this species a chance at recovery — if not, we risk losing spotted owls in Canada.”

A few months ago, only one known spotted owl was left in the wild in all of Canada. That’s now changed with the reintroduction of three captive owls into the wild. Despite the species’ steep decline, the B.C. government has continued to approve commercial logging in areas of old-growth forest that should have been set aside for the species’ recovery. There are approximately 450 cutblocks that have been approved or are pending approval in areas identified as suitable spotted owl habitat.

When provinces fail to protect endangered species and their habitat, the law requires the federal government to step up and take action.

“The government of Canada’s spotted owl recovery plan, including mapping and action to protect habitat, is long overdue,” said Protected Areas Campaigner Joe Foy for the Wilderness Committee. “The B.C. government is guilty of approving logging in spotted owl habitat — but Canada has also been guilty of foot-dragging and hand-wringing while this species is being logged to death.” 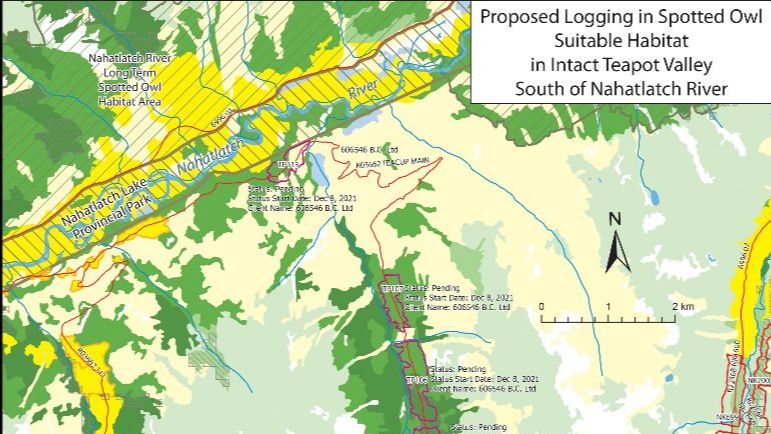 The federal government has a legal responsibility under the Species at Risk Act to protect at-risk species and their habitat from imminent threats and to identify critical habitat that endangered species, like spotted owls, need to survive and recover. Despite this requirement, it has failed to identify critical habitat in an updated recovery strategy for spotted owls. Under the act, an emergency order to protect all spotted owl habitat necessary for their survival and recovery is long-overdue to give this species a fighting chance at survival.

An emergency order could immediately protect all identified spotted owl habitat that is needed for the species to survive and recover to healthy numbers. If the federal government fails to take immediate action now, B.C. will continue to log spotted owls to extinction in Canada.

In two months, Canada will host the 15th United Nations Biodiversity Conference bringing together leaders from around the world with the aim of halting biodiversity loss. Canada presents itself as a global environmental leader, but the federal government’s ability to halt biodiversity loss requires strong federal enforcement of habitat protection. Case in point — the spotted owl.