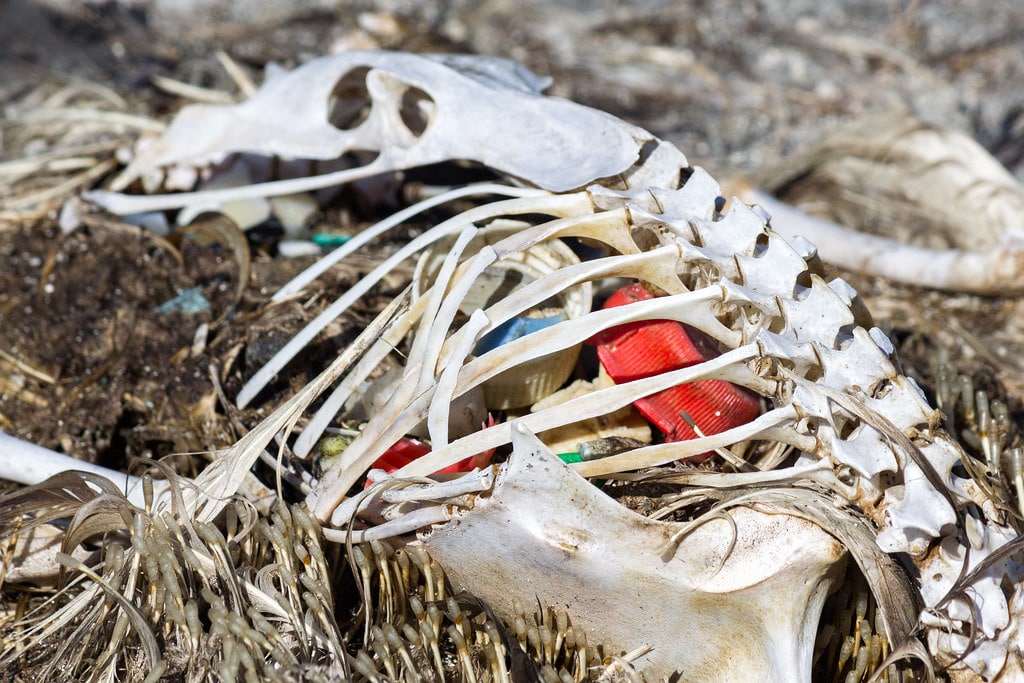 "As it decomposes, an albatross carcass reveals the plastic the bird consumed before it died" by ericdalecreative

More than two dozen plastic manufacturers have filed a lawsuit in Federal Court challenging the new regulations. Ecojustice, on behalf of Environmental Defence and Oceana Canada, has applied to intervene in the case.

This is the second lawsuit filed in court by this group of manufacturers, which calls itself the “Responsible Plastic Use Coalition.” The group’s first lawsuit was filed in 2021 and seeks to overturn the designation of plastics as “toxic” under the Canadian Environmental Protection Act (CEPA). That case is expected to be heard in March 2023.

The second lawsuit, launched last month, asks the Federal Court to revoke that ban. It also asks the Court to prohibit the Canadian government from using CEPA to regulate single-use plastics and to prevent implementation of the ban in the meantime.

The environmental groups opposing the lawsuit say the plastic industry’s agenda is out of step with science and public opinion. The groups say the industry should focus its efforts on transitioning away from harmful and unnecessary plastics rather than wasting public resources with lengthy court battles.

“The Canadian government has begun taking much-needed steps to tackle the growing plastics pollution crisis, but industry is fighting these efforts at every turn.

“More than 32 countries have already banned or are on the way to banning single-use plastics. It’s time for Canada’s plastics industry to stop obstructing efforts to curb our plastics crisis and instead seize this opportunity to be a global leader in renewable and reusable alternatives.”

“We are in a plastic pollution crisis because every year, billions of plastic items are used once and thrown away – items that pollute our oceans and waterways for decades or centuries,” said Kim Elmslie, Oceana Canada’s Campaign Director. “Recycling addresses a measly eight per cent of our country’s plastic waste. There is both overwhelming evidence of the harm caused by single-use plastics and overwhelming support from Canadians to switch to reusable and refillable packaging solutions so we can stop devastating our oceans and marine life. Government action to regulate plastics is an essential step to stop plastic pollution at the source.”

“We’re not going to stand by while the oil and plastics industry tries, once again, to stop essential environmental regulation meant to protect us from some of the worst polluting plastics,” said Karen Wirsig, Plastics Program Manager at Environmental Defence. “The federal government is standing on solid ground with the single-use plastic bans. The evidence is clear that these products are doing damage to the environment. The industry should call off the lawsuits and take responsibility for the mess they are making.”

May 12, 2021: Plastic manufactured items (PMI) added to Schedule 1 of CEPA. This designation of PMI as a “toxic” substance under the Act enables the Minister to make regulations governing plastics at all stages of their lifecycle.

May 18, 2021: Plastics coalition launches first lawsuit against federal government shortly after the publication of the government’s order adding PMI to the List of Toxic Substances under CEPA in the Canada Gazette.

November 12, 2021: Ecojustice, acting on behalf of Oceana Canada and Environmental Defence, granted leave to intervene with the court. Groups plan to make arguments defending the government’s efforts to combat the growing plastics crisis and provide a public interest perspective on the environmental impacts of plastic pollution.

December 21, 2021: the Minister of Environment and Climate Change and the Minister of Health announce draft regulations under CEPA banning certain single-use plastics that are significant contributors to plastic pollution.

June 20, 2022: Government announces ban on some single-use plastics, including straws, takeout containers, grocery bags, cutlery, stir sticks and plastic rings. The government’s phase-out approach includes a ban on the import and manufacturing of these items by the end of 2022, sale by the end of next year, and an export ban that takes effect by the end of 2025.

Plastic pollution has quickly become one of the most pressing environmental issues of our time. In fact, the United Nations identified plastic pollution as the second most ominous threat to the global environment after climate change. And just like climate change, a lot rides on how the global community responds to this crisis in the coming decades.

Trends are heading in the wrong direction. Plastics production and waste is forecasted to triple by 2060, according to the Organisation for Economic Co-operation and Development (OECD).

More production inevitably leads to more waste. Of the plastic waste produced annually, approximately 50 per cent is some form of single-use plastic. Canadians throw away more than 3 million tonnes of plastic waste every year. Only nine per cent of Canada’s plastic waste is recycled, while the rest ends up in our landfills, incinerated to produce energy, or polluting the environment. The Liberal government has set 2030 as the target date for halting the flow of plastic waste into landfills, waterways, and natural spaces.

Fighting for accountability for plastics pollution