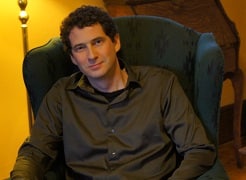 When author Kenneth Oppel looks at himself in the mirror each morning he sees a concerned Canadian, not a radical environmentalist. “I’m not a demonstrator and I’m not good in meetings, but I do throw money at things I believe in,” said Oppel, a science-fiction novelist and author of 27 books for young adults. While his books embrace fantasy, he knows a healthy environment is possible, despite the devastation taking place on the planet in real life.

Oppel does his part to protect the planet by living an environmentally friendly lifestyle. “The first step I took was getting recycled toilet paper,” he said. “That led to recycling and buying things that came in recycled containers.” Today, Oppel’s Toronto home is powered with renewable energy and lit by eco-friendly light bulbs. He still drives a car, but owns only one for his family of five — and it’s a hybrid.

He began donating to Ecojustice back in 2000, inspired by a newspaper article about some of its legal work around the environment. “I was impressed by the fact that Ecojustice took people to court,” he said. “I liked that they took that extra step, that they used our judicial system to protect the environment and to force government to enforce environmental regulations. I thought it was gutsy.”

What Oppel wants in exchange for his donations to Ecojustice is a promise that it will continue using the law to defend Canadians’ right to a healthy environment.

“Whatever role Ecojustice plays in making that happen is a good thing.”