Seven young people, backed by Ecojustice, are suing the Government of Ontario for weakening its climate targets because it will lead to widespread illness and death, violating Ontarians’ Charter-protected rights to life, liberty, and security of the person.

As young people, the applicants say they and people like them will bear the costs of climate inaction more than previous generations.

The Ford government passed the Cap and Trade Cancellation Act in 2018. The Act repealed what were considered to be relatively strong greenhouse gas reduction targets for 2020, 2030, and 2050. The government then replaced these targets with a single, significantly weaker 2030 target.

By weakening the province’s targets, the Government of Ontario will allow significantly more greenhouse gas emissions to be emitted, further fueling the climate emergency and contributing to dangerous climate change-related impacts such as heatwaves, floods, fires, and poor air quality that will harm the health of people throughout Ontario.

Ontario’s backsliding comes at a time when there is a clear scientific consensus and moral imperative for governments to limit warming to 1.5°C. Meeting this temperature goal, set out in the Paris Agreement, will require global greenhouse gas emissions to halve by 2030 and reach net-zero emissions by no later than 2050.

The applicants, who hail from communities across Ontario and range in age from 13 to 25, are represented by lawyers from Ecojustice and Stockwoods LLP Barristers in this public interest litigation. Read more about this case here. 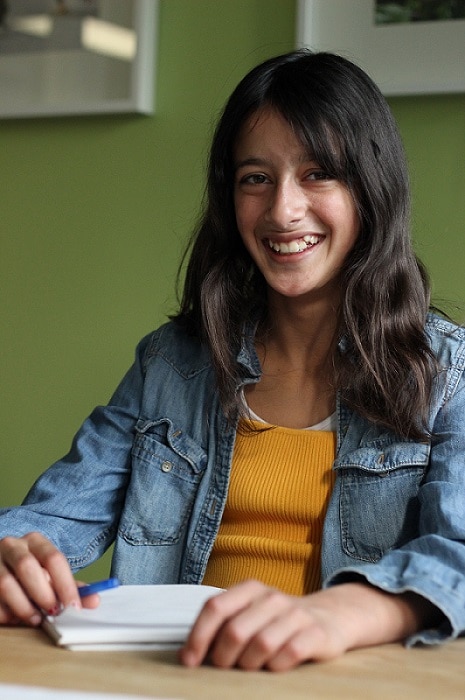 Home to me is: “The forest behind my house in Sudbury.”

Sophia Mathur was the first student in Canada to join the Fridays for Future movement. Sophia started striking for the climate in her home city of Sudbury, Ont. in November 2018 — months before Swedish activist Greta Thunberg became a household name. In September 2019, Sophia joined Greta in New York, where the two participated in a panel on climate activism and marched in the Global Climate Strike on Sept. 20.

Why Sophia is taking Ontario to court for weakening its climate targets:
“It’s important for me to be part of this lawsuit because my generation deserves a future. When I grow up, I want to be a lawyer. I also have lots of other hopes and dreams and I want the chance to make them come true. That’s why it was important for me to start striking for the climate in November 2018, and why I’m working with other young people to take the government to court today.”

Home to me is: “Downtown Toronto, with my dog Rosie.”

Zoe Keary-Matzner may be growing up in Canada’s biggest city, but she says she’s always felt a connection to nature — and she’s concerned about how climate change will impact the places and activities she loves. Zoe loves hiking, but fears a rise in Lyme-disease-carrying ticks. She loves playing in the snow, but is worried about changing winters. And she wants to study animal behaviour as an ethologist one day, but she’s scared about what biodiversity loss will mean for her career plans.

Why Zoe is taking Ontario to court for weakening its climate targets:
“I’m taking the Ford government to court to fight for the Earth, for nature, and for animals. This is the only planet we have and it’s home to the only known life in the universe. There used to be so much diversity but now climate change is making it disappear. The government needs to take action now.” 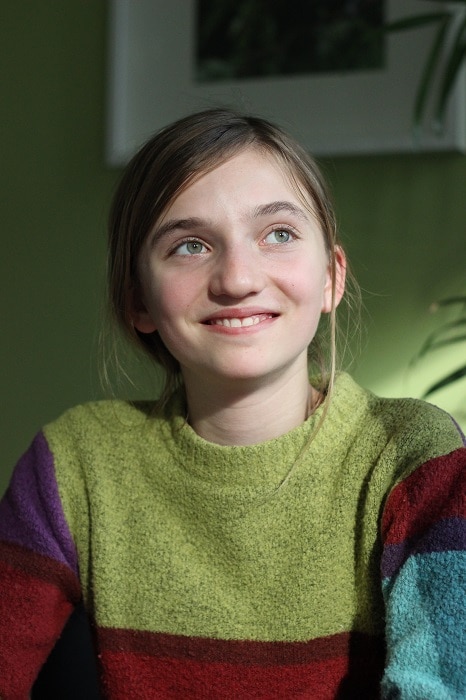 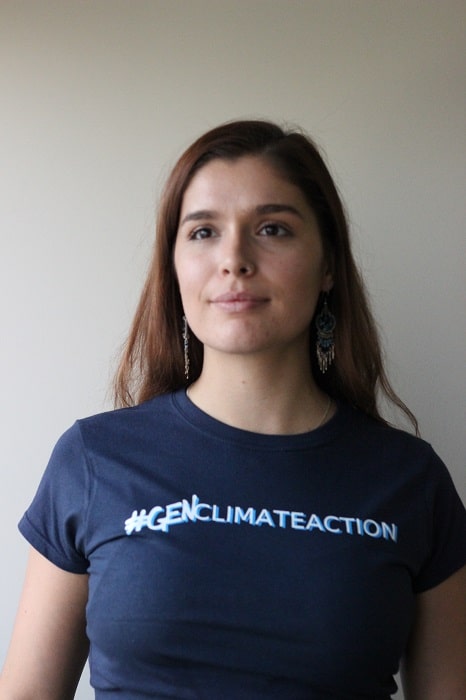 Home to me is: “Peterborough. With the people I love – my family and boyfriend.”

Shaelyn Wabegijig is one of seven young people taking the Ford government to court for weakening Ontario’s 2030 climate target. Shaelyn grew up in Rama First Nation and her family are Algonquin from Timiskaming First Nation and of European Descent. She is Caribou Clan and resides in Nogojiwanong (Peterborough). Shaelyn is the office and SDG Project coordinator at the Kawartha World Issues Centre.

Why Shaelyn is taking Ontario to court for weakening its climate targets:
“I’m part of this lawsuit for everyone, for future generations and for our non-human relatives. If I ever bring children into this world, I want to be able to share healthy air, land and water, a safe climate, and my culture. As a member of the Caribou Clan, my cultural identity is interconnected with Ontario’s boreal caribou, and it risks disappearing if this species is wiped out.”

Home to me is: “Home is Thunder Bay and up north. It is the land my family has walked and lived on for centuries, the land I walk on now. It is the sound of the animals the trees and water. Home is community and the expression of people that make it humble, kind and humorous.”

Shelby Gagnon is Anishinaabe. She is an artist and community support worker focusing on Indigenous food sovereignty in northern Ontario communities. She spent her early childhood in Aroland First Nation, and now lives in Thunder Bay.

Why Shelby is taking Ontario to court for weakening its climate targets:
“I care for my future generations and the livelihood of all the animals and plants that call the bush their home. We need a future to look forward to. We need clean air, water, and food that comes from the only planet we have. I’m worried about how climate change will impact food sovereignty for Indigenous peoples across Canada. This makes me sad for myself and for future generations, who may one day be unable to harvest traditional medicines.” 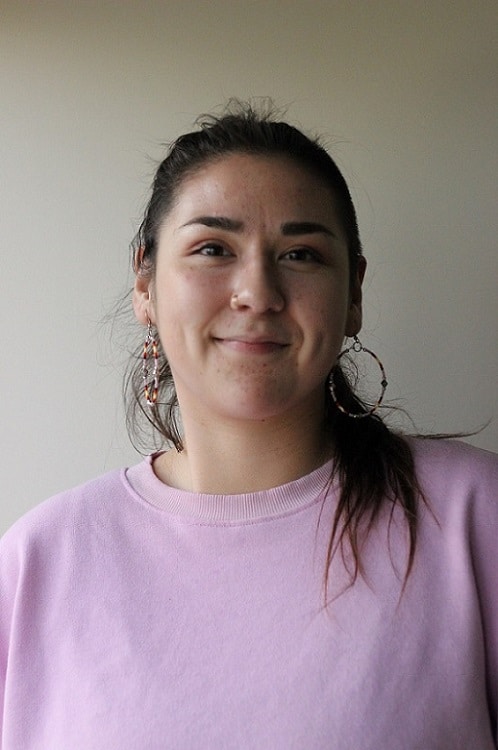 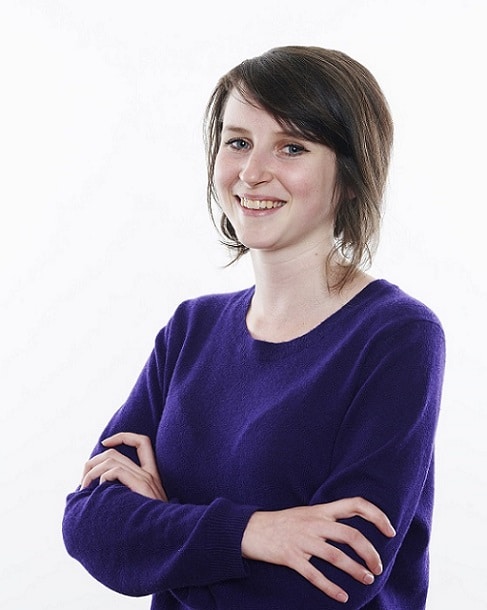 As a young entrepreneur, Alex Neufeldt is concerned about the uncertainty climate change creates for her small business. When record-breaking flooding slammed Ottawa in the spring of 2019, it threatened Alex’s fledgling dress-rental business, Closet in the Sky. Alex is concerned extreme weather events in the future could cause delays for customers returning dresses, and she’s worried about how to safely store the designer pieces her company relies upon.

Why Alex is taking Ontario to court for weakening its climate targets:
“Open for business is Doug Ford’s favourite catch phrase. But if he really cared about protecting the economy for entrepreneurs like me, he wouldn’t have rolled back the province’s climate targets. We can help stop climate change and create jobs. But we need the political will to do it.”

Home to me is: “The waters of Lake Superior.”

Madison Dyck is a climate activist and student from Thunder Bay. An avid sailor, Madison spent May 2019 sailing to communities around Lake Superior and giving presentations on climate change. Madison is concerned about the changes she’s already seeing in her environment, including rising lake temperatures, more forest fires, and impacts on fish stocks, moose, and blueberries. She’s also worried about how climate change impacts her mental health.

Why Madison is taking Ontario to court for weakening its climate targets:
“I’ve always felt a connection to the land and water around Thunder Bay, and I’m scared about the changes I’m witnessing. When I see how climate change is impacting the places I love, I feel a deep sense of loss. I’m angered and confused by the government’s failure to act — so I’m going to court to make sure Doug Ford can’t continue to turn a blind eye on the climate crisis.” 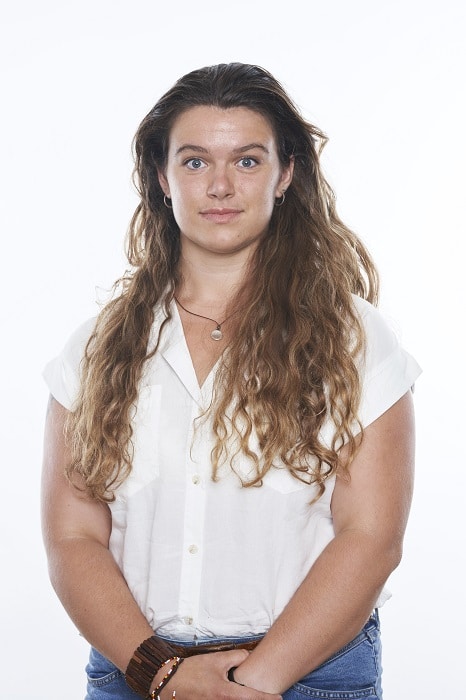 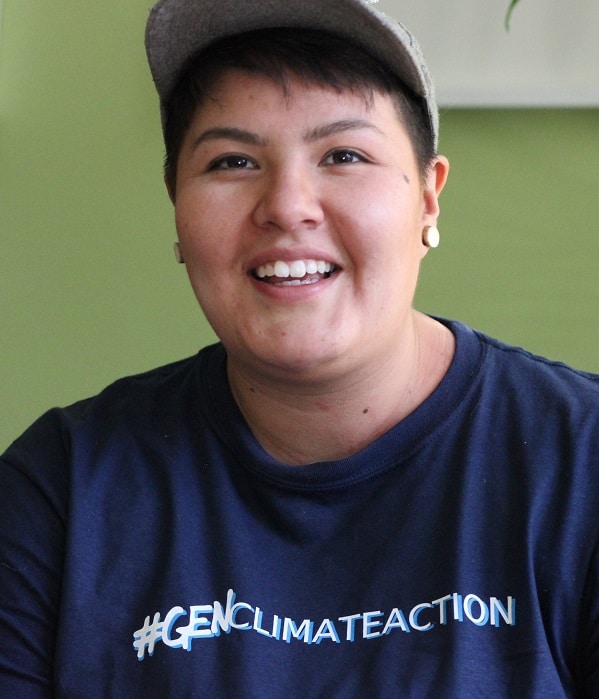 Home to me is: “Home is my territories which is all around the Great Lakes (Treaty 29) and being with the people I care about.”

Beze Gray is an Anishnaabe land/water protector and student from Aamjiwnaang First Nation in Ontario. Growing up in an area near Sarnia that is also known as Chemical Valley, Beze has witnessed the impacts of the fossil fuel industry firsthand.

Why Beze is taking Ontario to court for weakening its climate targets:
“I grew up beside petrochemical refineries in Ontario’s Chemical Valley. I know the impacts of big corporation on the land and people, what happens to the land, happens to the people. When I think about the future, I feel scared about how climate change will impact my community’s way of practicing our culture, teachings and our health. We need to hold the Ford government accountable for upholding treaties and higher standards for the land and future.”