If we’re serious about saving endangered killer whales, we better get our act together.

By March 31, a plan laying out the who, what, when, where and how of required government action to protect and restore the endangered Southern Resident Killer Whales and their habitat will be three years late.

The Southern Resident population was among the first species to go through the recovery and action planning process set out under the Species at Risk Act. Its recovery strategy was finalized in 2008 (and later updated in 2011, thanks to our litigation efforts), but without an action plan in place to guide recovery efforts, many of the biggest threats to the whales remain unaddressed.

A small population of 85 animals, the Southern Residents reside seasonally in the Salish Sea where they come to hunt salmon. The Salish Sea includes the Strait of Juan de Fuca, the Strait of Georgia, Puget Sound, and all their connecting channels and adjoining waters, including the waters around and between Washington’s San Juan Islands and British Columbia’s Gulf Islands. Much of this area has been identified as the whales’ critical habitat – defined in Canadian law as habitat necessary for their survival and recovery. 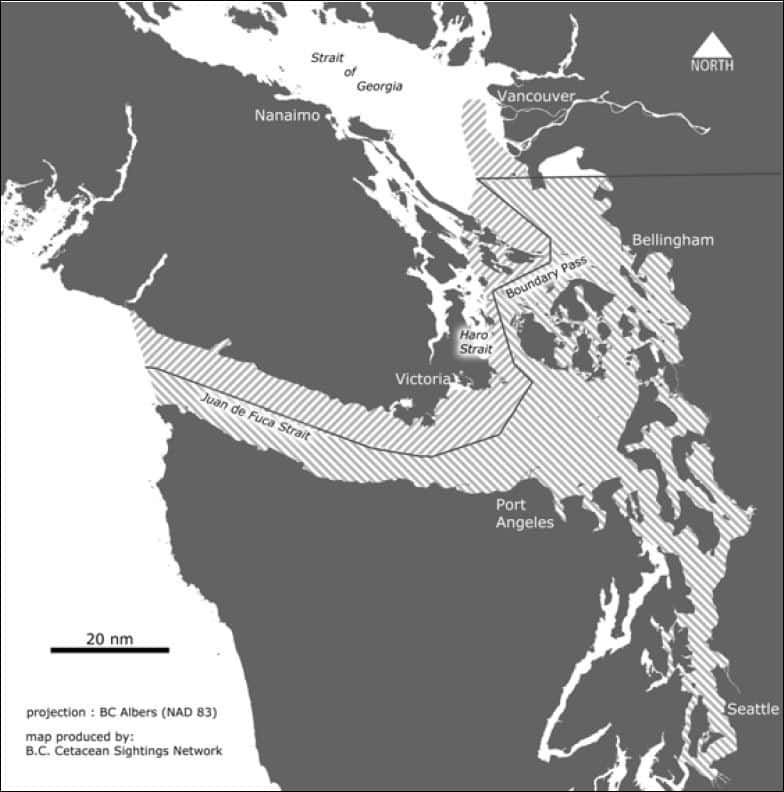 Image by Fisheries and Oceans Canada

The expert team of scientists that prepared the 2008 recovery strategy identified four key threats that must be addressed to ensure survival and recovery of these whales:

The overdue action plan’s job is to lay out required government actions to ensure the whales are protected from these threats and get what they need to survive and thrive.

To do that, this action plan must spell out a concrete, clear and meaningful plan to implement recovery measures. In 2014, we reviewed an early draft of the action plan that, in our view, didn’t contain any real “action”. We’ve since heard rumblings that the new federal government is poised to release a new draft of the action plan. We hope to see a much stronger plan this go-around.

In the meantime, Chinook salmon populations in the Salish Sea continue to struggle and various stressors including our changing climate may depress stocks even further. While integrated fisheries management plans for salmon do now at least mention killer whales, there is still no plan to ensure the long-term availability of Chinook salmon for whales.

Marine pollution is still an issue we fail to take seriously. For example, despite more than 20 years of talking about sewage treatment, the City of Victoria continues to dump untreated and contaminated effluent into the whales’ critical habitat. For now, that community seems unable to land on a plan to deal with this problem. As another example, Kinder Morgan’s proposed pipeline expansion could increase oil tanker traffic transits through critical habitat by nearly seven times. The company has not proposed an oil spill response plan addressing the impact of a spill on endangered killer whales or their critical habitat.

Physical disturbance from boats, including whale-watching vessels, is still being addressed through non-binding guidelines. In the United States, boats are required by law to stay at least 200 metres away from endangered whales within their critical habitat. Canada has been “reviewing” regulations under the Fisheries Act to add rules for approach distances for marine animals, including whales, since 2003. There appears to be no plan for finalizing this process.

And despite a legally-binding protection order that states that critical habitat is to be protected from acoustic disturbances, there are still no rules regulating ocean noise in whale critical habitat. A growing scientific consensus shows vessel noise limits the whales’ ability to locate and capture prey and to communicate with other whales. This is a particular problem in the Salish Sea where recent ocean noise studies show that 60-90 per cent of the whales’ ability to communicate is already compromised when in the vicinity of shipping lanes.

A slew of proposed projects — including the Terminal 2 expansion at Robert’s Bank; coal transport expansion, for example the Fraser Surrey Docks proposal; Kinder Morgan’s tar sands pipeline; and various LNG terminals — all promise to increase vessel traffic through the already noisy Salish Sea. There is no plan to deal with the cumulative impact increased vessel traffic will have on the Southern Residents and their critical habitat.

Signs of hope for the future

We remain hopeful that the new government is taking species-at-risk issues seriously, and will produce a new, meaningful draft action plan in the coming weeks. If this proves to be the case, it will be a busy time for Ecojustice and our clients. Once a draft plan is released, the public will have 60 days to comment. This will be an important opportunity for all Canadians concerned about the Southern Residents to weigh in on whether the plan proposes action that meaningfully protects critical habitat and addresses prey, pollution, and disturbance concerns.

The whales are counting on all of us to come up with a plan that limits threats to their recovery and protects their critical habitat.

The exciting news is that there are many signs of hope for the whales. A recent analysis for Southern Residents shows that their population should grow if we can hold key threats at bay and increase the availability of Chinook salmon for whales. In the last 15 months, nine baby orcas have been born in Southern Resident pods, providing an even greater impetus for recovery efforts to move ahead. The first two years of life are a difficult and dangerous time for killer whales — it’s a time when existing threats pose the greatest risk to their survival.

The whales are already doing their part. It’s time for us to do ours. For their sake, let’s get our act(tion plan) together.

World Whale Day: Taking a look at what we’re doing to protect whales

Trans Mountain pipeline expansion: How we challenged it and won