Sitting at the eastern entrance of the famed Northwest Passage, Lancaster Sound is home to narwhals, belugas, ringed and harp seals, and walruses. The area also boasts one of the highest densities of polar bears in the Canadian Arctic, and one third of Canada’s colonial seabirds rely on Lancaster Sound for feeding and breeding.

Despite this abundance of wildlife, these waters have long been threatened by the possibility of exploratory drilling for oil and gas.

That’s why we launched a lawsuit in April on behalf of the World Wildlife Fund (WWF), asking the court to order the government to remove Shell Canada’s expired oil and gas permits in Lancaster Sound from a registry of active permits.

Today (June 8), we saw a positive development in the fight to protect this important habitat.

In honour of World Ocean’s Day, Shell has released the permits at issue in the lawsuit, via the Nature Conservancy of Canada, to the federal government. 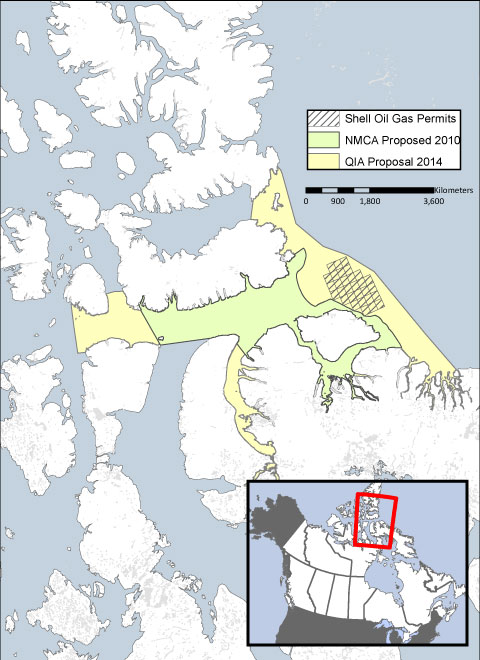 Local Inuit communities have spent more than three decades calling for a designated marine protected area that would encompass Lancaster Sound. But until now, Ottawa had proposed protecting a much narrower area, which skirted around the expired oil and gas exploration permits and left key stretches of the region unprotected.

The release of these permits to the federal government marks an important step towards recognizing and preserving Lancaster Sound’s incredible biodiversity.

The government now has the opportunity to propose new boundaries for the Lancaster Sound National Marine Conservation Area that would align with the boundaries proposed by the Qikiqtani Inuit Association, which our client supports. The wider borders would acknowledge and better respect the traditional knowledge of the Inuit communities who have lived in the area since time immemorial.

If Canada follows through and officially designates a new National Marine Conservation Area within the boundaries proposed by the Qikiqtani Inuit Association, it would bring us closer to these international standards.

It would also show our commitment to protecting Lancaster Sound’s unique arctic environment — and the wildlife and communities that call this place home.