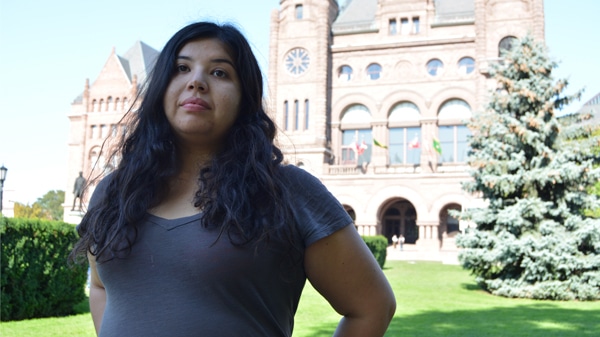 On a cold and wet winter night in February 2017, the skies above south Sarnia and Aamjiwnaang First Nation were alight with massive flames spewing from Imperial Oil’s facility in Sarnia’s Chemical Valley.

Local warning sirens sounded at the start of the flaring, but suddenly cut out with no explanation. Despite the towering flames, concerned citizens were unable to get answers about what was going on when they called the Spills Action Centre, the Ministry of Environment and Climate Change (Ministry), and Imperial Oil. Many community members took to social media to try to find out what had happened and whether they were in danger. Some stayed indoors, fearing that their health was at risk.

During the heavy flaring, a grass fire appeared on Imperial’s property and that of a next-door facility. The flames rattled windows in Aamjiwnaang First Nation, created loud noises, and caused a bad odour. Light poured into residents’ homes at night, making it difficult to sleep, as black smoke and noxious fumes filled the air in and around the community.

The initial flaring incident was so massive that some residents feared the refinery itself was on fire — the flames were large enough that they could be seen from across the American border in Port Huron, Michigan. As massive flares pushed clouds of volatile chemicals, sulphur dioxide and sulphur compounds into the air, community members became frustrated with the lack of information.

Months later, residents are still in the dark about what exactly happened that evening.

That’s why we’re helping local resident Vanessa Gray call on the Ontario government to investigate the incident and how Imperial Oil handled it.

Why was it so difficult for community members to get information about this massive polluting event that left them fearing for their personal safety?

“If Imperial is going to continue to put our lives, our health, at risk, then they need to be held accountable,” Gray told Toronto Star. “This is my territory and I have the right to feel safe in my own environment.”

Gray, a member of Aamjiwnaang First Nation, is a 25-year-old Indigenous land defender who has consistently (and literally) put her body on the line to fight back against environmental racism and defend land, water and air for Anishinaabe Peoples.

Gray knows all too well that Chemical Valley and its toxic surroundings pose health risks in Aamjiwnaang and neighbouring communities.

Imperial Oil calls it steam, we call it fire.

The fire chief of Sarnia, who was never contacted by Imperial Oil during the incident, called the flaring “excessive.” However, Imperial refused to even confirm that video taken from the American side depicted their facility. The company and the Ministry have also characterized the flames as “steam.”  Dean Edwardson, a representative of the industry-funded Sarnia-Lambton Environmental Association referred to the event as an “optical illusion.”

Not so, say those who witnessed the event first hand. The massive flaring started around 6:20 p.m. and continued for another five hours. The refinery continued to flare at higher-than-normal levels periodically throughout the next 10 days, until the problem was finally corrected on March 5.

The Ministry never conducted targeted air monitoring during the incident and the monitoring that Imperial conducted was insufficient because it relied on tools that are not sensitive enough to detect contaminant levels that exceed regulatory standards. In fact, the monitoring equipment is only able to detect hydrogen sulfide levels that are one-hundred and fifteen times higher than the acceptable air quality standard.

The community monitoring stations were not downwind during the flaring, and the handheld air monitors used by Imperial Oil consultants were not sensitive enough to accurately measure the pollution levels during the height of the flaring event.

According to Imperial Oil, the flames were a byproduct of “visible flaring” — where a plant relieves gases that need to be burned off before a facility can resolve an internal issue or malfunction. Flaring happens during plant shutdown, restart, or malfunctions. However, this incident was seriously disruptive to life for residents.

Needless to say, these types of flaring incidents should not be “normal.” Unfortunately, while incidents such as this would be considered unacceptable in most Canadian communities, they are conspicuously common in Chemical Valley. Between 2014 and 2016, government records show that nearby residents suffered more than one hundred flaring incidents.

In 2016, a Global News investigation highlighted the plight of people living in and near Ontario’s Chemical Valley. Residents living near this dense cluster of industry breathe some of the most polluted air in Canada. In response to Global’s investigation, the Ontario government has announced that despite previous refusals to do so, it will fund a study on the health effects of Chemical Valley. Federal Health Minister Ginette Petitpas Taylor followed that announcement, stating that the federal government would investigate why federal funding was withheld.

We’ll keep you posted on how this request for an investigation into Imperial Oil’s flaring incident goes. The road to justice in Chemical Valley is long, but with your support, Ecojustice will keep up our decade (and-counting) long fight. Thank you.