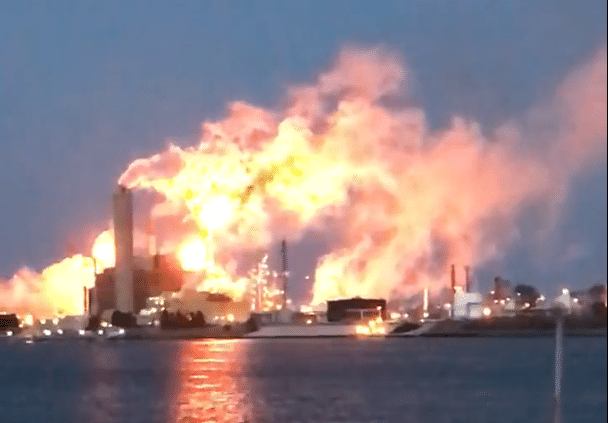 Another damning report from the Environmental Commissioner of Ontario (ECO) is calling out the provincial government’s failure to address ongoing impacts of air pollution from industry in Sarnia’s Chemical Valley on Aamjiwnaang First Nation and other First Nations communities in Ontario, including Grassy Narrows.

In the report, titled Good Choices, Bad Choices the Commissioner has publicly expressed, for at least the fifth time, serious concerns about the government’s failure to protect the health of the people of Aamjiwnaang and to follow through on its commitment to review how it regulates cumulative effects of air pollution.

As it stands, the Ontario Ministry of Environment and Climate Change (“MOECC”) does not have a policy for consistently considering the cumulative impacts on human health or the environment when several polluters are located close together, as they are in Chemical Valley. Instead, it grants air pollution permits to each facility as though they exist in isolation.

The MOECC first committed to review its regulations in 2009, following a request by Ecojustice clients Ada Lockridge and Ron Plain of Aamjiwnaang First Nation. More than eight years later, the review is still incomplete. This week’s ECO report confirms once again that “eight years is not reasonable especially when human health is at stake.”

Ecojustice agrees, and so does our client Ada Lockridge.  Frustrated with the government’s foot-dragging, Lockridge is taking the MOECC to court.

Ontario has a long way to go when it comes to promoting environmental justice — the principle that all communities deserve to be equally protected from threats to their health and environment. Weak and poorly enforced environmental laws expose socially vulnerable people to significant pollution.

And so, communities like Aamjiwnaang are taking on much of the risk, with little reward. The economic benefits of that pollution are, instead, enjoyed by privileged groups. Those directly affected by pollution are often unable to meaningfully participate in the environmental decisions that affect their health.

Commissioner Saxe’s latest report comes on the heels of a scientific study on pollution and health by the internationally-renowned Lancet Commission, which cites Ontario’s Chemical Valley as a prime example of environmental injustice in Canada.

In Canada, the numbers are staggering. 7,700 of us die each year from poor air quality alone. Add air pollution and the health effects caused by exposure to toxics together, and the annual cost to our economy is estimated to be in the tens of billions of dollars.

It’s easy to see that weak enforcement and inadequate monitoring of Ontario’s air pollution regulations do not protect public health.

Saxe criticized Ontario’s outdated air quality standard for sulphur dioxide — of which elevated concentrations can lead to respiratory distress. The sulphur dioxide standard in Ontario was set in 1974, is six times higher than the level Health Canada has identified as sufficient to protect public health, and is three times higher than the Canadian Ambient Air Quality Standard.

The concentration of petrochemical facilities in Chemical Valley makes the outdated sulphur dioxide standard of particular concern to members of Aamjiwnaang First Nation, where a high number of community members suffer from respiratory conditions like asthma. Just this week, Chief and Council issued a statement outlining how the provincial and federal governments are failing to protect their community’s health and environment, by retaining an outdated sulphur dioxide standard.

Facilities “opting out” of health-based standards in Chemical Valley

The MOECC decided to allow six petrochemical and refinery facilities close to Aamjiwnaang to opt out of complying with Ontario’s health-based benzene air quality standard. Instead of enforcing the health-based standard, the MOECC says they will require these facilities to install “economically achievable” technologies to reduce benzene emissions. However, many of the new technology requirements will not come into force for years.

Ignoring some emissions, such as those from industrial flaring used to burn off excess chemicals during facility start-up, shut-down and malfunctions, is also problematic. Acid gas flaring by refineries in Chemical Valley is a major source of sulphur dioxide emissions, but industry does not reliably include air pollution emissions from flaring in reports used for compliance. Further, the Ministry has not followed its  own requirements to make sure industry includes these emissions, the ECO report states.

A recent exposé by Global News, the Toronto Star, and the National Observer used documents obtained by Ecojustice, and uncovered more than 500 excess pollution incidents in a two year period. Of those 500 incidents, more than 100 were related to flaring.

Last week, Ecojustice filed an application on behalf of our client, Vanessa Gray, to demand the province fully investigate a February flaring incident at Imperial Oil that rattled windows, filled the air with a foul smell, and poured volatile chemicals and sulphur dioxide into the atmosphere. The incident at Imperial Oil is but one example of the ongoing affronts to the health of people living in close proximity to industrial development.

With your support, we will continue working with Aamjiwnaang community members to support their fight for environmental justice.  Ecojustice is working with a coalition of groups to modernize the Canadian Environmental Protection Act (CEPA)— our wildly outdated national toxics management and pollution control law.

Among many necessary changes to fix CEPA, we’re calling on the government to recognize the human right to a healthy environment and to enact stringent national air quality standards — two changes that could make a big difference in communities like Aamjiwnaang where people are denied their right to breathe clean air.  Updating our pollution and toxics laws and empowering communities to participate in decision-making will go a long way toward protecting our environment and making Canada a more just and equitable place to live.