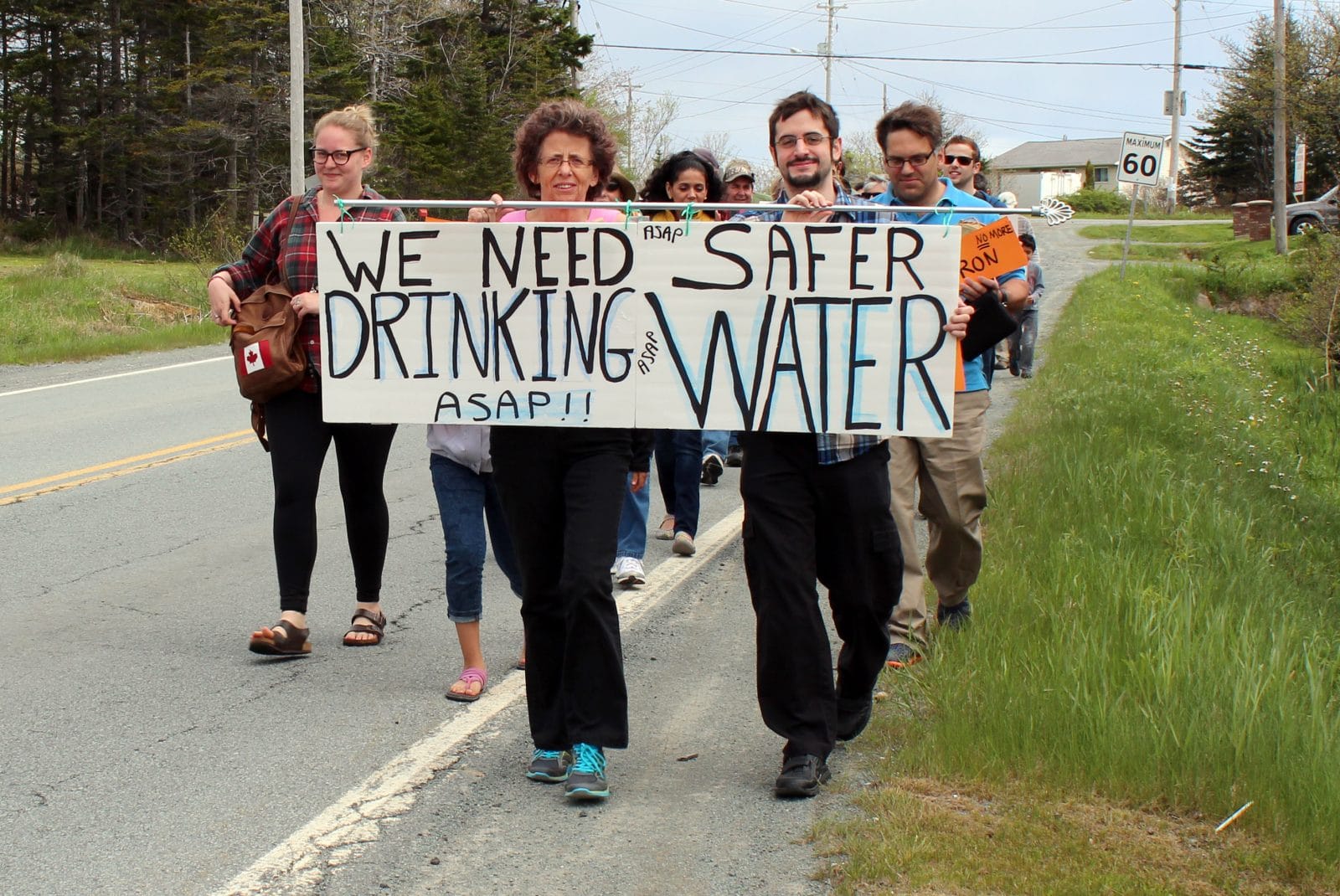 I’ve seen how a lack of clean drinking water can affect our families and communities.

In October, I travelled from Toronto to Halifax to appear before the Nova Scotia Supreme Court on behalf of Marlene Brown, Melissa King and Jonathan Andrews. With help from Dalhousie Legal Aid and East Coast Environmental Law, I helped my clients intervene in an appeal that could have serious implications for their community’s health and drinking water.

The Ongoing Fight for Safe Drinking Water
Marlene, Melissa and Jonathan live in Harrietsfield, a small rural community on the outskirts of the Halifax Regional Municipality. The water they drink and use to wash dishes, bathe and brush their teeth comes from a well.

Over a number of years, operations at a construction and demolition recycling facility contaminated the local groundwater. In many instances, the levels of uranium, arsenic, lead and boron in nearby wells exceed Canada’s Guidelines for Canadian Drinking Water Quality. This situation poses serious risks to residents’ health (Read more about the case, Protecting groundwater from contamination in Harrietsfield, Nova Scotia).

What Happens When Your Water’s Contaminated?
Every day, many community members struggle to access clean drinking water on a limited budget. While I was in Nova Scotia, Marlene gave me a glimpse of her daily routine. When we arrived in Harrietsfield, she and I stopped for water at the local United Church. Marlene lugs around plastic jugs in her car’s trunk. She and many of her neighbours fill those jugs at the church.

The ground under the tap was wet. This made Marlene happy. She told me the wet ground meant community members are using the clean water rather than drawing water from their contaminated wells. Later, Marlene and I sat in her yard, which is across the street from the site that is the source of the contamination. We watched a beautiful stream flowing over some rocks. That stream passes through the contaminated site.

One Family’s Life, Interrupted
Lack of access to safe drinking water poses additional problems for Marlene’s neighbours, Melissa and Jonathan. The couple has a two-year-old son, Emmett. Because of the contamination, Emmett has never had a bath at home. Instead, his parents make arrangements to bathe him at family members’ homes. My own son is also two years old. I cannot imagine how stressful this situation is for them.

Why is Ecojustice involved?
If nothing is done, residents will continue to struggle to access safe drinking water — something many of us take for granted. They’ll drive to their local church and to the homes of family and friends to fill their water jugs. They’ll replace appliances and sinks because the contaminated groundwater erodes them. All this despite living just a 20-minute drive from Halifax.

I’m involved with this case because Melissa, Marlene, and Jonathan need help. The Nova Scotia government ordered several companies to clean up and monitor the site. But one of those companies wants its name removed from the cleanup order.

“We’re angry and fed up,” Marlene Brown said. “If the company is removed from the order then others listed can do the same and there will be more delays in bringing healthy and safe water to our community.”

I’m working with my clients to ensure that the companies and individuals responsible for the contamination in Harrietsfield continue to clean up and monitor the site. Just last week, I drafted post-hearing submissions because the court had some additional questions about the case.

Why Canada Needs National Drinking Water Standards
The situation in Harrietsfield is a symptom of an even bigger problem. Our country has a patchwork of water-protection standards that allow industrial activities like mining or construction and demolition recycling facilities to jeopardize our freshwater resources. In places, the patchwork is leaking.

Most Canadians expect that the water we drink will be clean and safe. But residents of Harrietsfield know that’s not always the case. At Ecojustice, we believe that’s unacceptable. We need binding national drinking water standards, which could help ensure equal access to safe drinking water for everyone in Canada, no matter where they live.

Reflections from my time in Harrietsfield
I returned to Toronto with extra baggage. Marlene gave me a handmade sculpture of Gandhi. She thanked me and the Ecojustice supporters who make my work possible.

While we await the outcome of the court case, we wanted to remind Melissa, Jonathan, Marlene and the Harrietsfield community that they’re not alone. Many people believe that well-enforced laws can help protect our need for clean and safe drinking water, no matter where in Canada you live.