Bill C-51: Peaceful protests are not a national security threat 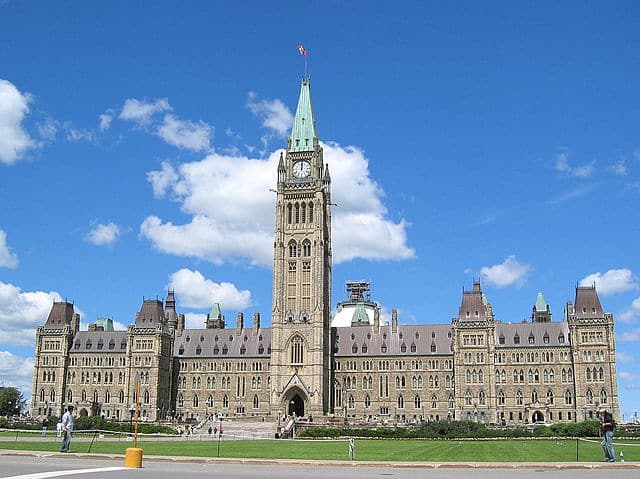 In recent weeks, Canadians from all walks of life have voiced concerns about the wide-sweeping Bill C-51 — the proposed Anti-Terrorism Act, 2015. Many of the concerns voiced by constitutional and security law experts have been about the new CSIS powers, preventative arrests, and new criminal offences against promotion and advocacy of terrorism offences.

Opposition to the Bill is coming from a surprisingly diverse range of actors — former Prime Ministers, retired Supreme Court of Canada judges, legal scholars, Aboriginal groups, the Canadian Bar Association, religious organizations, Canada’s Privacy Commissioner, national security law experts, civil liberties groups, and environmentalists — all of whom point to potential violations of the Charter of Rights Freedoms and interference with individual liberties and free speech. Even right-wing figures such as Rex Murphy, MP Michael Chong, and the notorious Conrad Black have come out against parts of Bill C-51, which many see as the “criminalization of dissent.”

As it turns out, the threat of widespread constitutional violations make for strange bedfellows.

At Ecojustice, Canada’s only national environmental law charity, my colleagues and I often work with concerned citizens and grassroots organizations who find themselves at the frontlines of the fight for environmental justice. Their work often sees them organizing to raise awareness in their communities, influence decision-makers and, at times, engage in lawful public protest.

Looking at Bill C-51, Ecojustice’s primary concerns revolve around the proposed information-sharing regime and its implications for First Nations and environmentalists engaged in non-violent protests against fracking, pipelines, or other projects that pose serious risks to the environment and human health.  That’s why we are relieved to hear that the government may respond to some of these concerns: It is expected to table some amendments to Bill C-51 on Tuesday, including clarification that protests and dissent are not national security threats. Since the amendments themselves have not yet been made public, we do not know whether they will sufficiently address this threat though it seems likely that significant problems will be left unaddressed.

As it currently stands, Bill C-51 has the potential to infringe on environmental and Aboriginal activists’ rights and restrict their right to political dissent and expression.

Expanded information-sharing and infringement of privacy rights
Among other things, Bill C-51 proposes to create the Security of Canada Information Sharing Act, which would authorize a range of government institutions to share information with each other about activities that undermine “the security of Canada”. This broad and vague term includes interference with “the economic or financial stability of Canada” or with “critical infrastructure.” It also includes “an activity that takes place in Canada and undermines the security of another state” — a concept that could even cover public protest activities by those in Canada opposed to repressive foreign regimes.

The Bill currently states that it would not apply to “lawful advocacy, protest, dissent, and artistic expression”. On first glance, this may seem like a legitimate approach: Full information sharing with a focus on unlawful activities. But up close, the law appears unbalanced and overly broad.  As explained below, amending the Bill so that it does not apply to any protest or dissent would be a significant improvement.

In its current form, Bill C-51 could be used to restrain fundamental civil liberties, affecting environmentalists, First Nations, civil liberties groups, religious minorities, and organized labour. It would enable the government to share information about such groups where they are engaged in “unlawful” forms of protest that may “undermine” Canada’s “critical infrastructure” or its “economic or financial stability.”

“Unlawful” does not mean “Criminal”
The exemption of “lawful advocacy, protest, dissent or artistic expression” would not protect all peaceful public protest. This is because although most peaceful protests are “lawful”, many forms of protest in a modern democracy are not. In other words, “unlawful” should not be confused with “criminal.”

Non-compliance with technical regulatory requirements or municipal bylaws is “unlawful”. Blockades are “unlawful” conduct, as are strikes inconsistent with applicable labour laws. Even a protest held without the right permits could be considered “unlawful”.

Peaceful protests aren’t a terrorist threat
Separate and apart from the issue of compliance with regulatory requirements or municipal bylaws is the issue of civil disobedience. Civil disobedience has been an instrumental part of social change movements throughout history. We’re all familiar with the use of civil disobedience in the American civil rights movement and the efforts of Gandhi in India and Nelson Mandela in South Africa. Here in Canada, it can also be seen in aspects of the recent Idle No More protests or the Clayoquot Sound protests of the 1990s.

This past December, people of all ages gathered on Burnaby Mountain to protest Kinder Morgan’s pipeline expansion. The vast majority of these people were engaged in lawful protest, while others, including two 11-year old girls, intentionally crossed the yellow police line — therefore engaging in civil disobedience and facing potential arrest. As it is currently worded, under Bill C-51, the government could broadly share information about these girls or others engaged in peaceful protest where it believes the activity interferes with Canada’s economic stability or “critical infrastructure”.  That is why amending the Bill to remove the word “lawful” is so important.

One of Bill C-51’s key components is that it purports to enable information sharing to protect against interference with Canada’s “critical infrastructure”.  Legal scholars, Aboriginal leaders, and environmentalists have expressed concern that this term could be interpreted to apply to things like pipelines, oil and gas developments, and hydro transmission towers.

Ecojustice does not believe that “critical infrastructure” includes pipelines or other energy infrastructure. The term more accurately applies to things like airports and hospitals. However, Canadians have cause to fear that the government will interpret the term much more broadly. For instance, a recently- leaked RCMP report focuses on “critical infrastructure” as being about threats to the petroleum industry from the “anti-Canadian petroleum movement.” Bill C-639, a private members bill backed by the Minister of Justice, would amend the Criminal Code to include an offence of “interference with critical infrastructure” and includes an extremely broad definition covering facilities or networks that distribute services relating to energy or transportation.

Removing all forms of protest from Bill C-51 would go a long way to address this problem.  However, if Bill C-639 is passed it could still mean that peaceful protests that interfere with “critical infrastructure” would be a criminal offence.

There is no doubt that information sharing is an important part of modern national security regimes. But if its objective is to protect national security against threats such as terrorism, Bill C-51 should focus on these threats. As currently drafted, Bill C-51’s information sharing mechanisms would apply to an overly broad and potentially endless list of activities falling under the nebulous concept of “activities that undermine the security of Canada”.

Bill C-51 should be amended to exempt all forms of “advocacy, protest, dissent or artistic expression” so long as they do not endanger life. A peaceful Aboriginal blockade or environmental protest is not a national security threat.  We are glad the government has heard this message.

Who’s watching Big Brother?
Though it would create significant new information-sharing powers, legal experts have pointed out that Bill C-51 does not establish a system to ensure accountability and respect for privacy rights — despite the potential for serious injustices to result from inadequate information-sharing oversight and safeguards (as illustrated by the Arar and Iaccobucci Commissions of Inquiry).

The list of government institutions that would be subject to the newly created information-sharing provisions is long — in addition to CSIS and the RCMP, it includes institutions outside of the security services, such as border control agencies, the Department of Health, and the Canada Revenue Agency. Once shared with one of these institutions, information could be further shared with “any person, for any purpose” so long as that sharing is not prohibited by law. “Any person” would, of course, include not only persons or government institutions, but also corporations or foreign governments.

It appears that the amendments to be tabled on Tuesday will temper this language about information sharing with “any person”, but the amendments will not address other concerns about accountability and oversight.

The future of dissent in Canada
For those still wondering whether sacrifices to civil liberties, free speech, and democracy may be justified in order to better protect ourselves from threats to our national security, it is worth noting that legal experts, including Professors Kent Roach and Craig Forcese, have concluded that Bill C-51 could actually undermine “more promising avenues of addressing terrorism” and have “negative and possibly dangerous collateral consequences” for national security.

For instance, in their statement to the House of Commons Standing Committee on National Security and Public Safety earlier this month, Professors Roach and Forcese noted the Bill could expand information-sharing so broadly that it risks “drowning” designated recipient institutions in information ranging from concerns about terrorism-related threats to peaceful environmental protests or protests against oppressive foreign regimes.

Removing all forms of protest from Bill C-51 would likely address some of these concerns.  However, the extent to which the effectiveness of the Bill will be improved through amendments remains to be seen.

Even without Bill C-51 applying to protest activities, environmentalists and Aboriginal groups have raised concerns in light of recent revelations of the federal government’s surveillance of public demonstrations across the country.  As history demonstrates, the fact that Canada is a democracy does not mean we are safe from government abuses of power or immune to targeted attacks on groups and individuals that criticize government policy.

Though we are hopeful that amendments will address some concerns about Bill C-51 and respect for privacy rights, many important questions about respect for human rights and our constitution remain.  It is likely that if Bill C-51 becomes law the courts will be called upon to provide much-needed legal guidance and to ensure our fundamental freedoms are protected where the government fails to do so.