Photo by US Fish and Wildlife services

In early October, in recognition of World Migratory Bird Day, we worked with Alberta Wilderness Associate and Greenpeace Canada to call on the Commissioner of the Environment and Sustainable Development to investigate the government’s inaction about migratory bird deaths on tailings ponds.

And we weren’t the only ones calling for action. More than 6,500 supporters have sent a letter urging the Commissioner to launch a thorough investigation.

Below are some of the birds that supporters like you have helped give a voice to.

As one of the oldest birds on earth, the whooping crane has survived millions of years of change. But the one thing it couldn’t shake off as easily was European settlement in North America, which saw a dramatic decline in the bird’s population. The entire global population of wild, migratory whooping cranes migrates twice each year on a path over Alberta’s tar sands on their way to the Peace-Athabasca Delta. These creatures of habit will return to the same nest site each year; with every trip comes the risk that it may turn out to be their last.

These impressive birds are one of the tallest in North America. They can grow to be as tall as 1.5 metres and have a two metre wingspan — that’s a reach nearly as long as Michael Jordan’s!

To travel the thousands of kilometres on its migration path, this bird has perfected a combination of spiralling and gliding, and can spend up to 10 hours in the air at a time.

Peregrine falcons are renowned for their grace and speed in the air — they’ve been known to exceed speeds of 300km/hr when diving to attack their prey. But even at those speeds, the peregrine falcon is able to use razor-point precision to catch birds as they sail through the air and can even scoop out one bird from a flock of many.

These birds have one of the longest migrations routes of any North American bird and can travel distances as far as 25,000 kilometres to reach their destinations every year — that’s longer than a roundtrip flight between Toronto and Patagonia, Chile. With a route that long, it’s no wonder that the peregrine falcon’s name derives from the Latin word for “wanderer”.

As a predator bird, the peregrine falcon remains threatened by habitat loss and destruction and is vulnerable to poisoning by environmental contaminants (like those found in tar sands tailings ponds) that accumulate in their food chain.

There are an estimated 100,000 horned grebes in North America.  A whopping approximately 92 per cent are found in Canada’s wetlands, making the Peace-Athabasca Delta a prime spot for it to head during Alberta’s summer months.

The horned grebe’s yellow-coloured tufts of feathers located behind its eyes give it a very distinct, horned look.

An interesting fact you may not know is that this bird eats its own feathers on a regular basis. And we don’t just mean a few feathers here and there. The horned grebe consumes so much that its stomach contains matted plugs, which are thought to act as a filtration device that stores food until digestion can occur. Parents will often feed chicks feathers in order to develop the young’s own ‘plug’ at an early age. 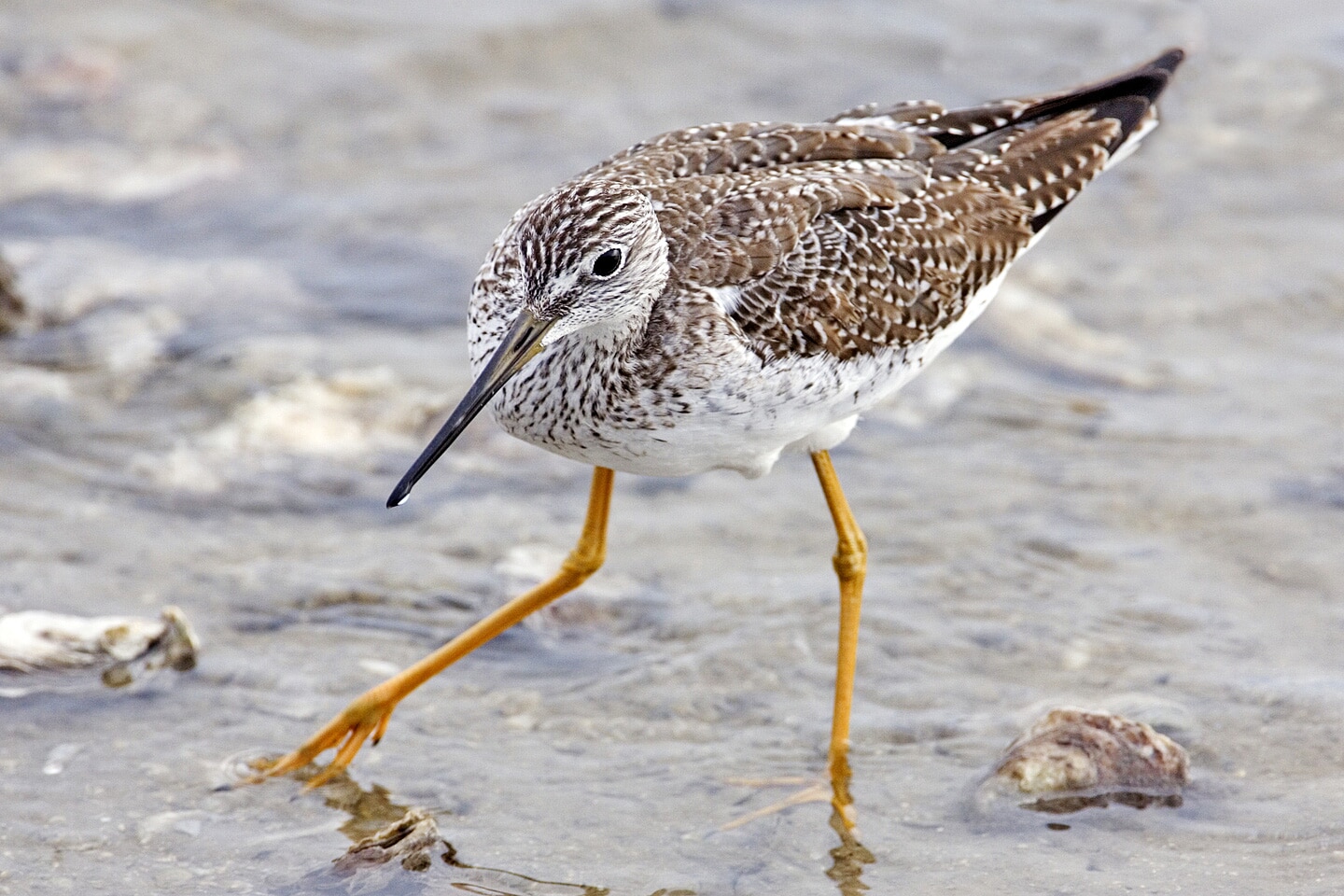 About 80 per cent of the lesser yellowlegs’ global breeding population is in Canada. This leaves the responsibility to conserve the world’s population of this species largely in our hands. 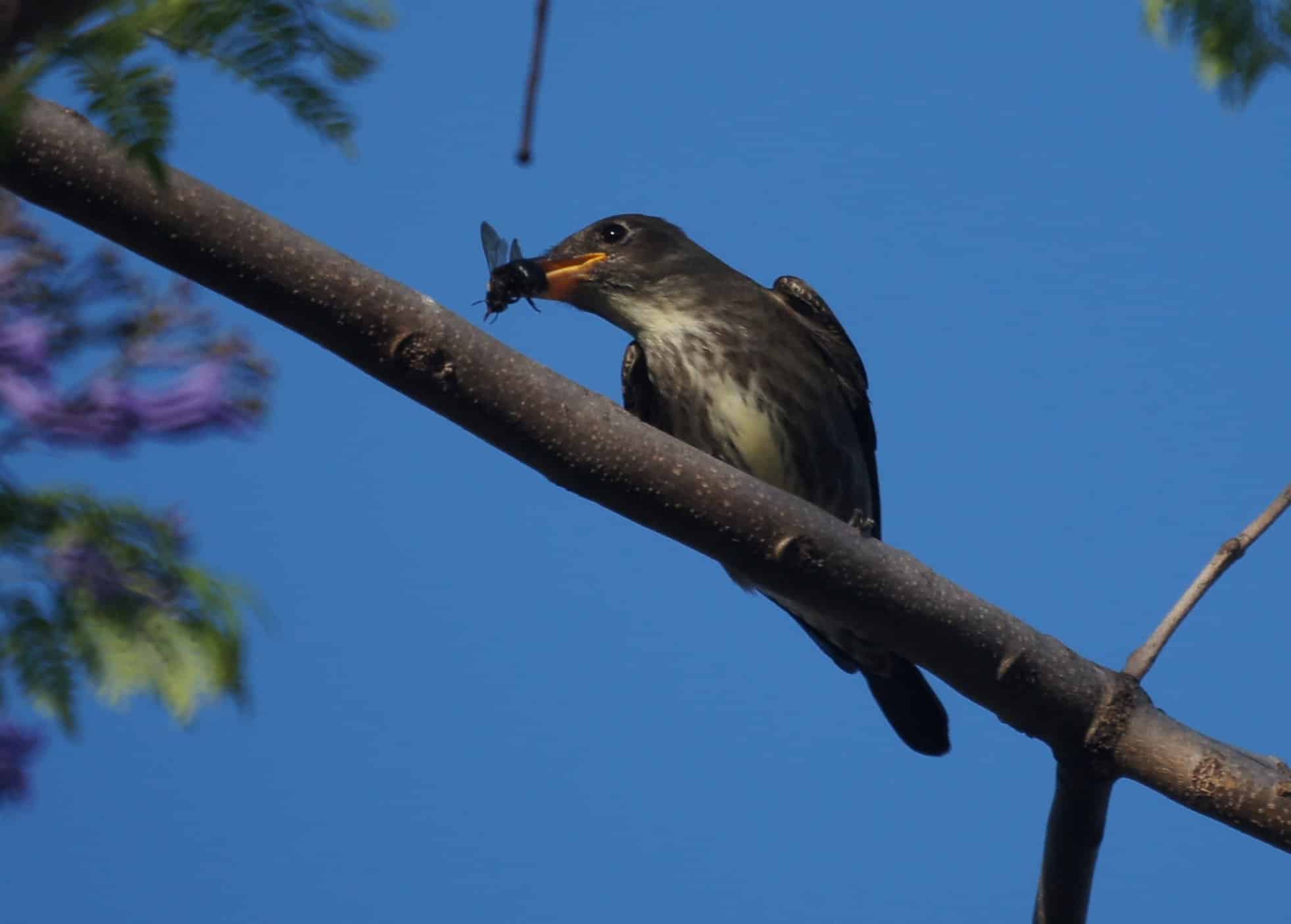 The olive-sided flycatcher gets its name from its appearance — it has feathers along its sides and back that are a deep brownish olive-gray colour against a white front. They are often seen perching trees, where they wait for flying insects to pass by. In addition to sitting atop trees, the olive-sided flycatcher will also spend time along streams and shorelines where insect densities are high.

This bird has one of the longest migration routes of any North American flycatcher, with some birds nesting in Alaska and spending the winter as far south as Bolivia.

They also have a loud, three-note whistle that sounds like they are singing, “Quick, three beers.”

What you can do to help these birds

These migratory birds (and many others) are in danger.

Tailings ponds in Alberta are some of the largest in the world. They cover more than 220 square kilometres in northeastern Alberta and contain more than 976 billion litres of liquid waste. Many of these tar sands tailings ponds sit on migratory bird pathways close to the Peace-Athabasca Delta. About 1.5 million migratory birds, including some of those listed above, visit the Delta during the spring and fall migrations.

And every year, almost 200,000 birds land on Alberta’s toxic tailings ponds thinking that they are natural bodies of water from the nearby wetland.   These birds can then become waterlogged and drown. Others may fly away, get sick, and even die after coming into contact with these toxic ponds.

Every person who stands up for these birds makes our call for change stronger.

Tailings ponds are killing migratory birds, and here’s how