The victories we share in our annual report are a testament to what we can achieve when we work together.

Read below to learn more about how we’re building the case for a better earth. 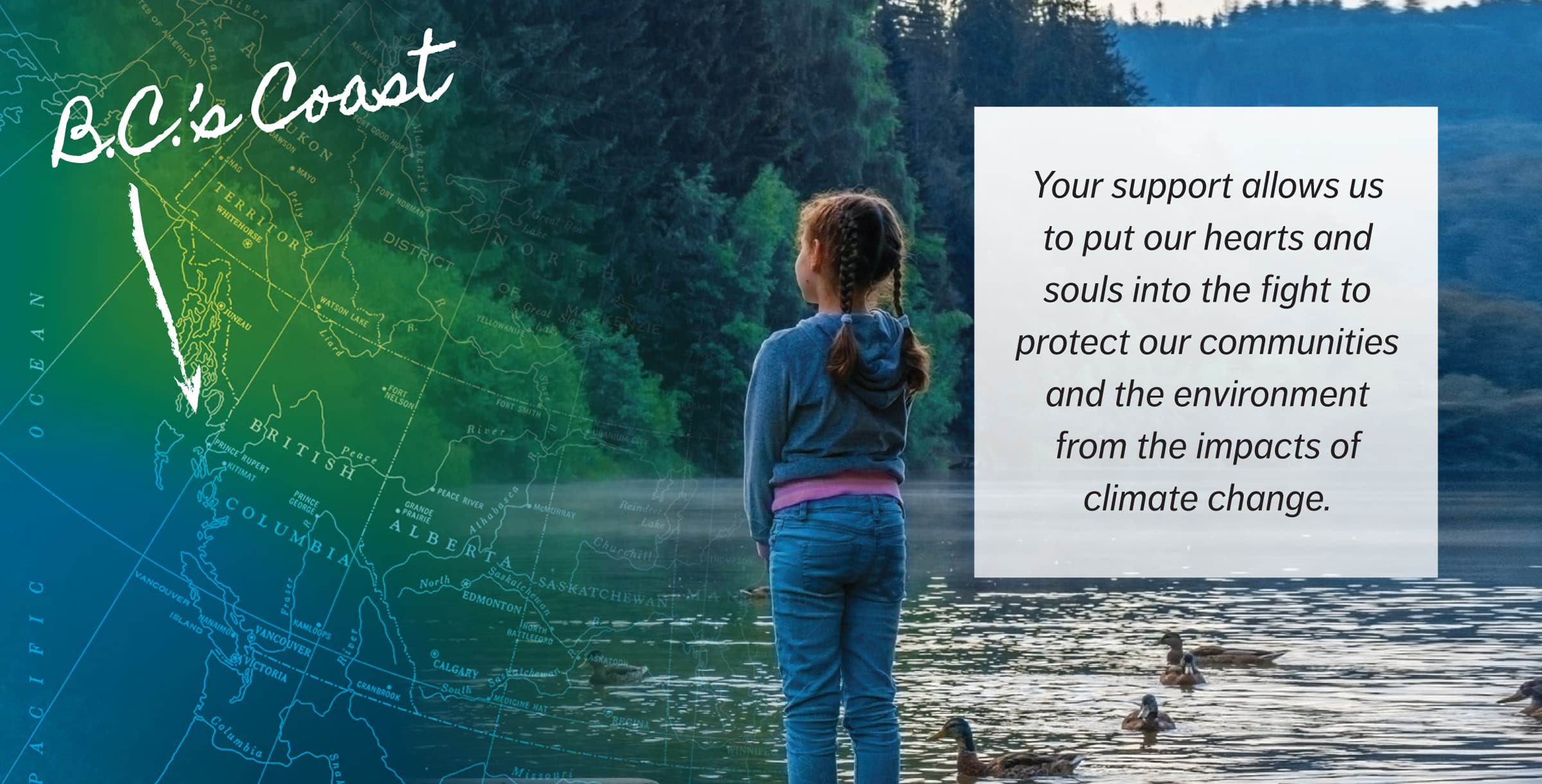 Last year, we stood strong in the face of destructive corporate interests and held government bodies to account, ensuring that community and environmental concerns were front and centre during project reviews.

While the end of Northern Gateway was a tremendous victory, it was not our only cause for celebration this year. When the National Energy Board’s review of TransCanada’s Energy East pipeline began we were one of the first groups to call out the project’s review panel for holding closed door meetings with interested stakeholders — one of whom was a TransCanada consultant.

Your support of the Ecojustice team helped set into motion a domino effect that resulted in the entire panel stepping down and the National Energy Board (NEB) later declaring any decision made by the former panel, void. In other words, our legal experts forced the NEB to hit the reset button on the flawed Energy East review and start the process again from scratch, helping to ensure the people, waterways and wildlife that live along the proposed pipeline’s route get a fair, impartial project review.

When Cabinet handed down its approval of the Kinder Morgan pipeline project, we threw down the gauntlet and filed a lawsuit challenging the decision. Not only will this project increase climate change-inducing greenhouse gas emissions, but it will further endanger the iconic Southern Resident killer whales that make their home in British Columbia’s coastal waters. We will not sit idle and let that happen.

The weight of scientific evidence tells us that certain pesticides pose a risk to pollinator species, the environment, and human health. That is why we are grateful for your support and are committed to doing all that we can to get harmful pesticides off store shelves and out of our homes.

Last year we celebrated Ontario’s restrictions on the use of neonicotinoid (neonics) pesticides — known for their harmful effects on pollinators, including mass bee die-offs. Your continued support helped us launch a case this year that takes aim at these same deadly pesticides.

Much like our efforts to keep toxic pesticides out of our communities and the environment, we’re also committed to ensuring polluters are held accountable for their actions — especially when it puts human health at risk.

As you might remember, we have been working closely with East Coast Environmental Law and residents of Harrietsfield, Nova Scotia, to fight for their right to clean, safe drinking water. We’re happy to report that we continue to make important progress on the ground.

In the fall, we went to court on behalf of Harrietsfield residents and helped uphold clean-up orders for the industrial site that has contaminated their drinking water. This legal victory confirmed that the companies responsible for the contamination must fix the mess they left behind.

And that’s not all: Thanks to Ecojustice supporters like you taking action, the provincial government promised to install water treatment systems in the homes of impacted residents, which will go a long way to easing the burden on our clients. While the government still needs to enforce its clean-up order and ensure the contaminated site is remediated, this second piece of good news gives us hope. Stay tuned for more on our efforts to #HelpHarrietsfield.

At Ecojustice, we believe that there is a direct connection between the strength of our laws and the health of our environment. That’s why we are working hard to capitalize on the once in a generation opportunity before us to improve Canada’s environmental laws. We made appearances across Canada to advocate for strengthening environmental assessment law, and have made key recommendations on how the federal government can improve the Fisheries Act, Navigation Protection Act, Canadian Environmental Protection Act and the National Energy Board Act.
It’s been a busy year of knocking on doors, researching the law, and thinking big, but we knew we could not let this opportunity slip us by: Now is our chance to get it right.

We teamed up after learning that the federal government was letting the fox guard the henhouse — in short, the Ministry of Fisheries and Oceans was offloading its regulatory duties to the same fish farm companies it was supposed to regulate.

We were set to return to the Federal Court of Appeal last May to defend our victory, when the government suddenly asked to delay hearing. The appeal has since been dropped, which means our victory will stand.

This is important, because our work to protect wild salmon is not over yet. In early 2017, a study confirmed that a deadly disease called heart and skeletal muscle inflammation is present on multiple B.C. salmon farms located along wild salmon migration routes.

This year, we’ll be going to court again to force the government to prove that farm fish are free of viruses that threaten wild fish before putting them in the ocean.

The west coast wasn’t the only area where we were able to protect some of our nation’s most treasured species. Sitting at the eastern entrance of the Northwest Passage, Lancaster Sound is home to narwhals, belugas, ringed and harp seals, and walruses. The area also boasts one of the highest densities of polar bears in the Arctic!

But despite this abundance of wildlife, these waters have long been threatened by the possibility of exploratory drilling for oil and gas. That’s why last spring, we asked the court to require the government to remove Shell Canada’s expired oil and gas permits from a registry of active permits. We didn’t need to wait long to see this victory come to fruition. Within months, Shell released the expired permits and the government announced a five-year plan to develop new National Parks and National Marine Conservation Areas, including the long-awaited Lancaster Sound National Marine Conservation Area.

Read the report in full